Born Cassius Clay on 17th January 1942, in Louisville, Kentucky, he changed his name to Muhammad Ali after converting to Islam in the 1960s. At the age of only 18, he won the gold medal in the light heavyweight division at the 1960 Rome Olympics. Later turning professional, he won the WBC, WBA and lineal heavyweight titles from Sonny Liston in 1964, when he was only 22 years old. 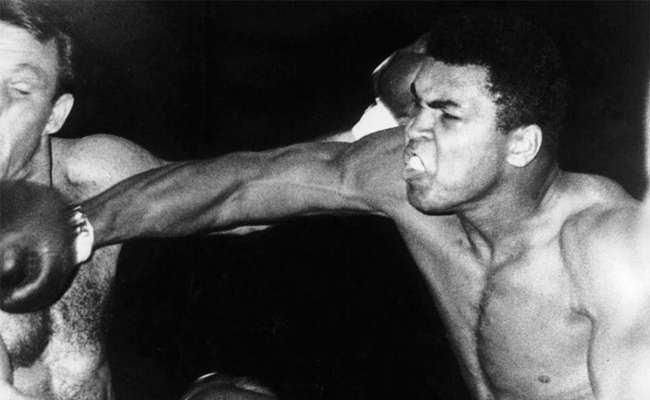 Throughout his whole professional career, there were only five fights where Muhammad Ali failed to beat his opponent. The first took place on 8th March 1971, when the two giants of heavyweight boxing, Muhammad Ali and Joe Frazier, met in the ring at Madison Square Garden, New York. In a clash dubbed the “fight of the century” for the WBA/WBC world titles, Ali lost the epic 15-round battle in a unanimous decision on points, after Frazier attacked him on the ropes and caused him to hit the deck with a left hook during the final round.

The second time Ali met his match was on 31st March 1973, in a 12-round split-decision loss against Ken Norton for the NABF heavyweight title in San Diego. Ali was the runaway favourite following 10 successive victories and was expected to breeze through against the unfancied Norton – a former marine. After an injury hampered Ali’s training, it appeared he had underestimated his opponent. Ali suffered a broken jaw in the second round, but carried on until the end, only to lose to his relatively unknown rival.

Ali was to meet his match again on 15th February 1978 in a 15-round split decision loss to Leon Spinks for the WBA/WBC heavyweight titles in New Orleans. Spinks, another ex-marine, had won Olympic gold in 1976 and the fight against Ali was his eighth professional boxing match. It was reported Spinks trained hard, while Ali only sparred. Despite Spinks having a muscle injury, he managed to outlast Ali.

Ali’s fourth loss came against Larry Holmes on 2nd October 1980, while boxing for the WBC world heavyweight title at Caesar’s Palace, Las Vegas. A temporary 24,790-seat outdoor arena was built for the fight. Ali was bidding to become four-times champion and reputedly earned a record $8 million to fight his friend, Holmes. Afterwards, it was claimed Ali was already showing signs of Parkinson’s and had struggled in the pre-fight medical examination. The fight was stopped after the 10th round by Ali’s trainer, Angelo Dundee. Although there wasn’t a knockdown, Holmes dominated, and all three judges awarded him every round.

The only other time Muhammad Ali suffered defeat was on 11th December 1981, in a non-title fight against Trevor Berbick at the Queen Elizabeth Sports Centre in Nassau, Bahamas. The judges unanimously awarded a points victory to Berbick, aged 27. At the time of the fight, the American boxing commission had refused to license Ali, then aged 39, due to his deteriorating medical condition but Bahamas did license him, although the fight was later described as a “shambles”.

Out of 61 bouts, Muhammad Ali won 56 – including 37 knockouts and 19 on points decisions. He retired from boxing in 1981 at the age of 39. After a truly exceptional professional career, he only lost 5 times.

When you’re looking to hire meeting rooms, London has some of the best in the country. If you need meeting rooms in London, give &Meetings a call on 0800 073 0499 – our venues are knockout!