The growing pace of technology has helped to transform meetings and staff attitudes towards them.

In the more go-ahead companies, they’re no longer the dull, much-loathed gatherings they once more.

The pace of innovation has made them more dynamic, with myriad apps and concepts helping businesspeople plan to do their tasks more efficiently. 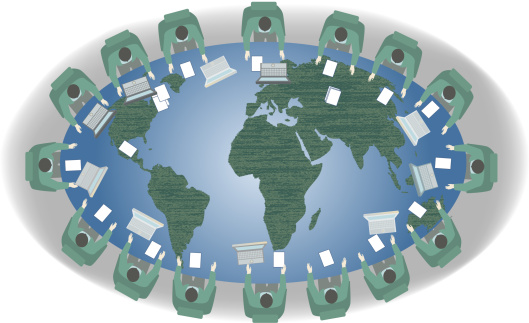 We’ve already enjoyed smartphone and smartcards, so why not smartpens? The Livescribe 3 is like something out of a James Bond movie. This pen’s shaft houses a mini-computer, an infrared camera, flash memory, and a Bluetooth wireless chip.

Using Livescribe dot paper, the contraption captures and digitises your handwriting notes from any meeting. It leaves you with a record that you can later search using the pen’s accompanying software.

Livescribe 3 pairs with Livescribe+ to immediately sync all your notes on to your iPhone or iPad. Your notes become more useful when they are organised, tagged, searchable and converted to text. The app also allows you to sync the audio with your written notes.

There are today more than 100 conference event guide app providers with a huge variety of choices and prices from free for a DIY app to $50,000 (£29,909) for a top-of-the-range app.

The technique has mushroomed in efficiency and popularity since the launch of reasonably low cost, high-capacity broadband since the late 1990s. By lessening the need to travel – and carbon petrol emissions – to bring employees together, the technology also helps reduce global warming.

The demand for Wi-Fi will continue to soar with meeting facilities having to adapt to survive, claim experts. An estimated two in three meeting planners now say their choice of meeting venue is impacted by free Wi-Fi availability.

Just one in 20 planners said Wi-Fi access would not affect their selections. Industry specialists claim that the future will see meeting venues and hotels providing free “throttled” internet, offering sufficient bandwidth for meeting attendees to surf the web, check emails or tweet.

Even planning meetings are becoming web-based as well as businesses themselves, sometimes saving firms hundreds of thousands of pounds. This is because meetings can now be prepared cheaper, faster and easier than programmers taking months – thanks to new online cloud computing-driven apps.

There are now over 1 million apps combined on iPad and Android, several of which are free or cheap. Experts say we are entering a post-PC era where laptops will appear as old-fashioned as a shoe-sized mobile phone.

And that’s before we’ve even started to talk about wearable technology, such as Google Glass and smart watches. These are expected to have a huge impact in office boardrooms and meeting places in the years ahead.