If you work in an office environment, you’ll have been to your fair share of meetings, with some of them seeming to be more useful than others. 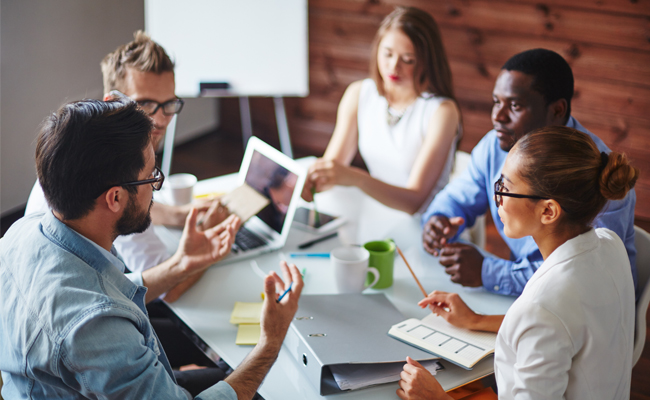 According to a study of more than 1,600 employees, one of the most frustrating things about meetings is the fact that a good many of them go on for too long, thus giving the impression there is no clear objective or purpose. The study by givemore.com revealed respondents thought overly-long meetings were neither inspiring nor motivating.

Rather than coming away with a proportionate amount of new information and action points, as one would expect from a longer meeting, attendees often left with very few takeaway points – even complaining they had learned no new information whatsoever.

Another study by Igloo Software of 1,000 workers revealed 53% considered meetings were productive, but 75% of respondents felt annoyed by meetings that seemed unnecessary – in particular, long meetings where certain buzzwords were used, with the debate seemingly going around in circles.

The list of the most annoying phrases and words was topped by “think outside the box”, with other nerve-jangling phrases including “touch base” and “bring to the table”, as the discussions rambled on and on, seemingly with the same things being said in different ways.

A number of employers believe the answer to combating employee dissatisfaction is to simply hold shorter meetings. This may seem obvious, but some employers who have established a pattern of long meetings may wonder how they can fit everything into a 30-minute slot.

Can shorter meetings be more productive? There’s certainly a school of thought which says that they can. According to a 2016 study by collaboration platform, Attentiv, meetings can take up countless hours of employees’ time, yet they often achieve few results because they aren’t properly structured.

The biggest drain on time is the staff meeting, followed by team and task force meetings and then information sharing meetings. Considering 47% of employees have found meetings unproductive, this is a good reason to try something new – in the shape of a 30-minute session!

Some managers may be horrified at the prospect of having to fit everything into a half-hour slot, but it can be done in an effective manner that leaves every attendee feeling they have achieved something useful.

The secret to achieving success with a short meeting is to stick to the timeframe as if the clock is an egg-timer, even if there are some meaty issues on the agenda. Start the meeting on time and raise each issue in its designated time-slot.

If debate on one issue gets complicated and appears to be going around in circles, the meeting chair needs to take control, curtail the debate and advise attendees to continue it “offline” after the meeting. Then, the resolution to the issue can be presented at the next meeting.

This strategy works well if the company’s culture is conducive to continuing discussions on complicated issues after the meeting. It’s no use if the attendees leave the meeting and then do nothing until it’s almost time for the next meeting!

A culture should be fostered whereby every single person must be keen to return to the floor and solve the issues that have arisen. Then, they can continue resolving any challenges in a timely manner and return to the next meeting with a succinct summary of their solution.

This way, other delegates have been spared a long meeting due to complicated issues being discussed that may not involve everyone. The appropriate delegates have the issues brought to their attention at the meeting, but they solve them away from the table.

To achieve the benefits of short meetings, as well as the company culture changing so that delegates will continue the discussions away from the meeting room, the chair must be a strong leader who can keep the agenda on track.

According to the survey by Attentiv, 64% of meetings last one hour or longer, with 39% lasting 90 minutes or longer. It follows that the longer the meeting, the more chance there is of a phenomena called “meeting fatigue” setting in, where attendees’ attention begins to wander and subsequently they are less productive.

As long as you can fulfil the criteria of a strong chair and an appropriate company culture, curtailing meetings after 30 minutes could be in your best interests – both for the company as a whole and for individual employees.

When you’re searching for the ultimate venue for your meeting, at a price you can afford, &Meetings is happy to help. For further information about hiring meeting rooms in London, give us a call on 0800 073 0499.