However, there’s another type of meeting that attracts thousands of people every year, including members of the royal family!

Horse racing, known as the “sport of kings” due to its long-standing royal connection, features many annual meetings all over the UK, at world-famous race courses. One of the most famous is historic Cheltenham race course, nestling deep in the Cotswolds countryside.

Dating back to 1815, Cheltenham is set in 350 acres and hosts some of the top national hunt races in Britain – attracting crowds of around 68,000 people. As its most famous meeting, and the most popular hunt meeting in the world, the four-day annual Cheltenham Festival takes place every March. 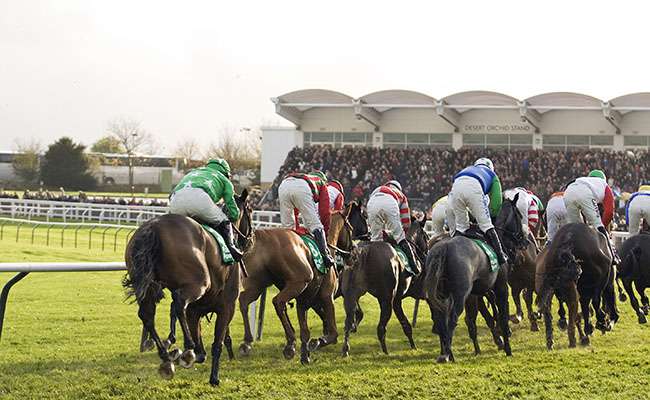 Showcasing a selection of the world’s finest horses, trainers, jockeys and owners, who will all be competing for the highest honours in jump racing, this year’s event will be held from March 13th to 16th.

Cheltenham Festival has attracted some of the finest horses in history, such as the legendary Desert Orchid – a king among racehorses, who was adored by the British public. Cheltenham’s most famous moment was when Desert Orchid won the Cheltenham Gold Cup in 1989.

In front of some 58,000 cheering fans willing him on to victory, “Dessie” (as he was fondly known) beat Yahoo in a thrilling race to the finish line. Ridden by jockey Simon Sherwood and trained by David Elsworth, he overcame his dislike of the heavy conditions that were caused by relentless rain and snow before the race.

Yahoo loved heavy going and it looked like he was going to win, but Desert Orchid kept on going and in the final stages, he managed to beat his rival by 1.5 lengths. Sherwood said afterwards that he had never known a horse so brave. The race was later voted the Greatest Race of All Time in a poll by the Racing Post.

In modern years, Cheltenham’s top jockey has been the legendary Irishman, Ruby Walsh, 38, who won the Leading Jockey Award at the meeting for the 11th time in 2017. Beginning his illustrious career as a jockey in 1996, he has an amazing 56 Cheltenham victories to his name.

Unfortunately, Walsh had been out of action due to a fractured right tibia that he sustained when he fell from Let’s Dance on November 18th last year at Punchestown. However, he returned last week with a win at Thurles and fans will be delighted to see him back in action for this year’s Cheltenham Festival.

The Festival has a long-standing royal connection, with many members of the royal family enjoying a day at the races. Its visitors have included the Queen’s granddaughter, Zara Tindall, who is an Olympic medal-winning horsewoman herself. Camilla, Duchess of Cornwall, has also been spotted at past festivals.

The late Queen Mother was such a huge racing fan that a race at Cheltenham was named in her honour: the feature race on the second day of this year’s festival will be the annual Queen Mother Champion Chase. The race has had some famous winners in the past, including Sizing Europe in 2011 and Sprinter Sacre in 2016.

There isn’t any official dress code at Cheltenham Festival, although the event’s website advises spectators that the weather can be chilly, so they should dress with this in mind. Many female spectators wear hats, while the gents normally wear a suit in the restaurants, club enclosure and hospitality areas.

Even fancy dress is allowed, although entry will be declined to anyone who is considered to be wearing an offensive outfit. Fancy dress isn’t allowed in the Club Enclosure or on BetVictor Gold Cup Day.

When you’re searching for the best meeting venue without any hurdles, &Meetings can help! To hire meeting rooms in London, please call 0800 073 0499… we’re the odds-on favourite!