A study by Bristol University into workplace hygiene reveals that 6% of UK employers have had problems with employees who suffer from body odour. More than 109,000 employees admitted to never wearing deodorant, while 75% of employees said they would find it unpleasant to sit next to someone who had body odour. 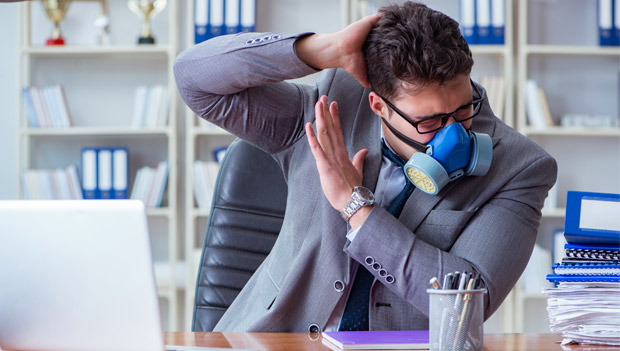 Taboo subject
Despite statistics showing personal hygiene in the workplace as being an issue, it is seldom discussed, as people find it embarrassing and difficult to raise the subject. In particular, if you’re in a meeting and sitting with people from other offices, or other departments, it’s not the kind of topic you can broach.

There are a few medical conditions that cause excess perspiration, but they affect less than 1% of the population. A poll of 2,000 working adults found that 5% of them didn’t take a bath or shower every day, while research also revealed 20% of Brits showered only four times a week, or even less.

Some extreme cases of personal hygiene issues in the workplace included employees who couldn’t focus on the discussions at a meeting because they were so overwhelmed by a colleague’s body odour. Anonymous surveys of employees have revealed some bad experiences at meetings.

One employee reported sitting next to a colleague who worked on a different floor, so they had little regular interaction. However, when they spoke at a meeting, the aggrieved employee said they found their co-worker’s body odour so offensive that they felt like turning their head away.

They concluded, “When I’m sitting beside him at a meeting, all I can think about is the smell and I can hardly focus on what’s going on.”

However, nothing had been said to the employee in question, because others were scared of causing offence and didn’t want to cause a bad atmosphere.

Tactful approach
Probably the situation most dreaded by managers is when other employees ask them to have a word with a colleague who has body odour. However, it must be tackled, no matter how difficult this can be, as it can affect staff morale.

There are several different approaches to personal hygiene issues. Some employees tackle the problem themselves if they find they are sitting next to someone with body odour.

They may turn the tables and say something semi-jokingly, like how they are “embarrassed” because they went jogging before work and didn’t leave enough time to take a shower, so they hope they don’t smell. The idea is that by putting the topic out there, the other person may think about their own personal hygiene.

Another direct approach is for employees to carry a small bottle of perfume or deodorant in their bag. Then, they can spray some on to themselves and also offer a spray to the other person, saying perhaps they would like to try it, because it has such a lovely aroma. Again, this is a subtle approach that doesn’t cause embarrassment.

Unfortunately, if the person doesn’t realise what’s happening and being subtle doesn’t work, the situation can quickly escalate. If there are complaints of an attendee at a meeting having body odour that’s affecting other people’s concentration and wellbeing, a manager needs to take control of the situation very quickly.

There have been some real horror stories of situations bordering on bullying when a person has gone into a toilet cubicle at lunchtime and other attendees have followed them into the toilet block and anonymously rolled bottles of deodorant under the door.

Management intervention
The best way for a manager to deal with the situation is to tactfully say to the employee they need to talk to them in private and take a softly-softly approach. Never say that other employees have complained about their body odour. A manager needs to be courageous enough to own the problem and say they have personally noticed the situation.

First, explain the problem in a calm and concise manner. Ensure the employee understands it’s a business issue and not you, as a manager, launching a personal attack on them. Do this in a diplomatic way by suggesting you’re concerned that if the issue continues, it may have an impact on colleagues. The last thing you want to do as a manager is to have an employee squirming with embarrassment and thinking everyone is talking about them behind their back.

Ask the employee if they have any medical problem, or any issue in their personal life which is causing problems. For example, the staff member may have lost their home and maybe living somewhere without adequate bathroom facilities. This would be a whole different situation from someone simply not bothering to take a shower.

Be diplomatic
Voice your expectations in a pleasant way, saying you hope they will be able to rectify the situation and asking them if there’s anything you can do to help.

If you have no idea of an employee’s personal situation, you can’t simply presume they can’t be bothered to shower. It may be the case that their own situation has changed – perhaps looking after a sick child or an elderly relative has left them insufficient time to care for themselves.

The most important thing is never to leave an employee feeling embarrassed and alienated. In most cases, one tactful talk will make them think about their hygiene issues and do something about it.
Sadly, in extreme cases where employees have been spoken to several times about personal hygiene issues, it has led to disciplinary procedures and even the sack if it’s simply the case that they can’t be bothered. Of course, nobody wants it to come to this, so hopefully the situation can be nipped in the bud with the least amount of fuss.

For clean, tidy and pleasant smelling meeting rooms in London, contact &Meetings on 0800 073 0499 to find the best venue for your requirements.