While this struggle is considered common, letting it ruin discussions can also disrupt concentration and impede the overall meeting agenda. 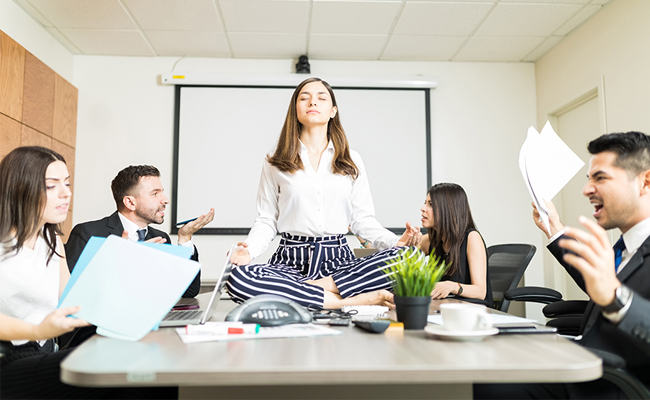 As the chairperson, facilitator or attendee, it is vital that you know how to handle any kind of conflict:

Common causes of meeting conflicts
Conflicts usually arise from misunderstandings and differences. As you address these, it is worth noting that you must only deal with the conflict and not the person; taking the conflict personally is unethical and should be avoided at all costs.

Here are some of the most common grounds for conflict:

Unclear roles and responsibilities
When assigning tasks for a project, you should never assume that the person knows exactly how their role works because more often than not, these assumptions are wrong; leading to a more serious form of status misunderstanding during the meeting.

Take ample time to explain the given tasks, responsibilities, limitations and deadlines to your team – and make sure you make things clear before the meeting starts.

The key to an effective meeting and a project’s utter success is when the team agrees to work in full coordination but when one or more member has different expectations regarding their work ethics (i.e. quality of work, efficiency and effort), that is where team coordination can fall apart. This problem can also cause personal resentments among the team members.

Key characteristics needed to handle conflicts
Learning how to deal with conflict may involve a certain set of skills — these skills, paired with your natural desire for the team to succeed — can greatly contribute to a much better understanding of any major issues and conflicts.

Active listening is essential to handling conflicts. How can team members deal with conflict if they do not know what has transpired in the first place? Pay close attention to each and every idea and ensure that you thoroughly understand all of them. If you feel something isn’t right, raise your concern or ask further questions.

Respect
Being disrespectful is conflict bait. Just because you disagree with someone’s idea does not mean that you need to lose respect for them as a person. Whether you are the chairperson or simply an attendee, learn how to manage your temper and manifest respect in all forms and aspects.

Diplomacy
As professionals, you should know how to handle conflicts with a sense of diplomacy. There is nothing wrong with a difference in opinion; just make sure that you express it in a way that doesn’t make others feel they are not entitled to their own viewpoint.

How to deal with conflicts

Knowing the root causes and gearing yourself up with the necessary qualities does not guarantee full control of the situation. To further prepare you for the certain clashes that may arise, here is some noteworthy advice:

Prevention is better than cure
The best way to deal with conflict is to watch over the early signs of it. Try to look at a person’s body language: Do they roll their eyes when someone speaks or do they raise their eyebrows as the team makes a decision? Facial expressions alone can give away a person’s disinterest in a situation.

If you have spotted signs like these, it is best to approach the person and give them the opportunity to speak their mind – but make sure you handle it in a way that will not lead to direct conflict.

Decision making is often the hardest thing to do – especially if more than one idea seems to be rational and agreeable. If everything about the discussion has been considered and you still don’t know how to come up with a final decision, then find a way to compromise.

Know how to depersonalise
When a conflict arises due to misinterpretation, learn the art of depersonalisation.

Depersonalising changes the way that a statement sounds through rephrasing it. The main goal of this is to make the statement sound objective rather than subjective. This technique avoids conflict caused by two parties just because a certain statement has been misinterpreted or misunderstood.

Apologise when necessary
If you know that you have caused a conflict, then acknowledge your mistake and say that you’re sorry. Problems are best resolved when everyone in the team knows how to accept their mistakes, instead of putting the blame on others.

Make use of your communication skills

Are you caught up in the middle of a conflict? It is time to work on those communication skills? You need to know how to negotiate between the two parties by getting your point across – especially if you are the chairperson or facilitator. Express your thoughts about an issue clearly and elaborate on why they should come up with this rather than that.

As the saying goes, “a problem well-stated is a problem half-solved”. With the finest meeting rooms in London you will surely start the meeting off on the right foot! Phone us today on 0800 073 0499 and let the meeting commence!