If you don’t deal with disruptors promptly and effectively, it won’t be long before they’ve managed to upset the meeting’s balance, killing the momentum and demotivating other people. This can prevent you from accomplishing your goals, so its important to know how to nip disruption in the bud. 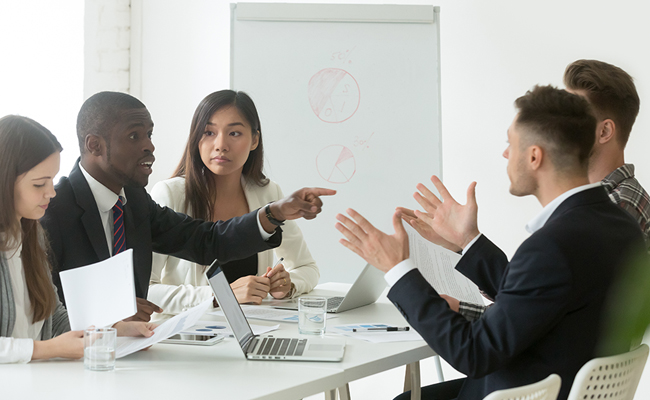 First, recognise the difference between healthy debate and someone being argumentative for the sake of it. If it’s simply a brainstorming session with lively discussion, challenging topics and healthy debate, that’s a good thing, as it encourages people to contribute to the ideas pool.

If someone starts being deliberately argumentative, making it personal and creating a negative atmosphere, this must be stopped. You don’t want everyone to leave the meeting feeling negative and deflated. To promote positive debate, make it clear that it’s an open, safe environment, where people can contribute freely.

Someone trying to dominate and steal the floor to the detriment of others needs to be diplomatically shut down while encouraging others to speak up. While you can listen to conflicting views, you must identify common goals – try to resolve differences by building on agreements you have already reached.

Speak to everyone respectfully at all times, using a positive tone of voice and language, even if other people appear to be feeling negative. Don’t place blame on one person or make accusations. Rather, state clearly that the meeting is about resolving a problem or challenge and not about one person. It’s about reaching a common goal that benefits everyone and the company as whole.

If anyone makes a personal attack on another person, stop it immediately. Point out there is zero tolerance for verbal abuse in the organisation. If the conflict still persists and one person appears determined to take it further, simply take the topic off the agenda, place it on the back-burner and then speak privately to the disruptive person later – to try and find out why they feel the way they do.

You may find that argumentative people feel angry and misunderstood in general about some aspect of their job and they are using the meeting merely as an excuse to release some of their frustrations. They may not even realise how others perceive them and how irritating their actions have become. Try to get to the bottom of it in a calm environment, in a one-to-one meeting.

People who try to dominate meetings are similar to those who are deliberately argumentative. They may be talkative in general and feel that what they have to say is more important than what others think. They may wish to show a superior knowledge of the topic and will talk continually to show off.

Again, this behaviour needs to be tactfully nipped in the bud by bringing others into the debate and asking what they think. Draw out objections with questions that other people can be encouraged to answer – for example, ask the group what they think of the disruptive person’s points of view.

Avoid actually recognising they’re a dominator, as this may give them a greater sense of importance. Instead, wait for a suitable moment to break in, politely thank them for their contribution and then throw it out to the group to discuss.

People who are generally disruptive may often be found talking to others during the meeting, as if they’re having a side-meeting all of their own. If you’re leading the meeting, this may be because they are bored – possibly because too much time has been spent on one topic – or it may simply be because they’re unaware of how their behaviour impacts on others and the meeting in general.

One technique for dealing with this is to first glance in their direction, making them aware their conduct has been noticed – or if this fails, go quiet, so the meeting temporarily stops, which may make them stop their private discussion if they realise everyone is now listening to them.

If you know your meeting includes a continually disruptive person who is likely to whisper to others, position yourself next to them! This usually has the desired effect.

Although dealing with difficult people can be irritating, it’s all valuable experience!

For the perfect meeting rooms in London that help business get-togethers run like clockwork, please contact &Meetings on 0800 073 0499.