The expression “stand-up” could become just as synonymous with office workers as comedians – if employers take notice of and act upon the findings of a new workplace report.

Standing at meetings improves both teamwork and creativity, according to the study from St Louis-based Olin Business School at Washington University.

Researchers found that while chairs may provide good support throughout long meetings, they don’t always support the greatest inventive ideas. 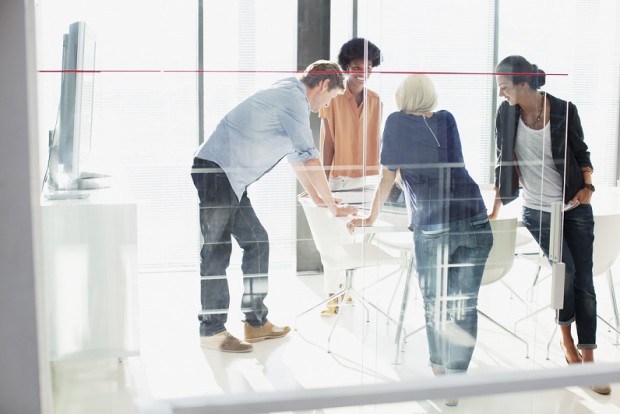 The study filmed office teams working in rooms with and without chairs over 30 minutes. It then replayed the movie, seeing how territorial staff were during this group process.

Volunteers wore little wrist sensors to record “psychological arousal”. This is how our bodies respond on getting excited. Hand and feet sweat glands release moisture when an arousal system gets activated. Their sensors transported a little burst of electricity into the body to monitor such bursts. Mr Knight and his team found that standing volunteers exhibited more physiological arousal. They were also less territorial over ideas than people with seats.

Mr Knight, who specialises in organisational behaviour, practises what he preaches by having his own adjustable-height desk at the university. This way, he chooses whether to stand or sit. He is trialling walking meetings as well.

Here are three ways you can increase your meeting productivity:

These are a fresh option available to bosses refitting their offices. Hampshire-based software firm VM Turbo have already made a successful transition from traditional desks to new chest-level tables. The 2013 switch was fundamentally introduced to project employees’ voices better when dealing with customers, with each one fielding between 150 and 200 calls daily. Leicestershire-based General Electric are among other firms contemplating a similar switch. The health implications are noteworthy too, varicose veins risk aside. People with sedentary lifestyles have a 54% greater risk of dying from a cardiac arrest, a Men’s Health magazine study found. Sitting all day at a conventional desk could accentuate these problems.

Winston Churchill was reportedly a big advocator of the benefits of standing up in meetings – and he should know. The late, former UK Prime Minister was voted the greatest Briton of all time in a BBC poll in 2002.

Deviation can be a killer in meetings – especially in long ones requiring intense concentration and understanding. One of the most common interruptions, apart from the office joker, comes in the form of mobile devices. They will either go off (often with a loud, annoying ringtone) or cause audible panic through being disconnected. So ban tablets and laptops. Your meeting should run smoother as a result. Your staff should be able to keep away from their apron strings from an hour at least. They can always catch up on them afterwards.

Time magazine recommends diet as key during meetings. So if they run over into lunchtimes, make sure that energy-sapping fast foods such as pizzas, chips and burgers are strictly off the menu. The same goes for fizzy drinks. Organise it so that healthier, protein-saturated choices such as fruit and veg are being consumed along with plenty of water.