The true story of how the multi-billion-dollar McDonalds empire began forms the plot of The Founder – a biopic starring Michael Keaton as an entrepreneur who saw the potential of the McDonald brothers’ burger café in San Bernardino, California. 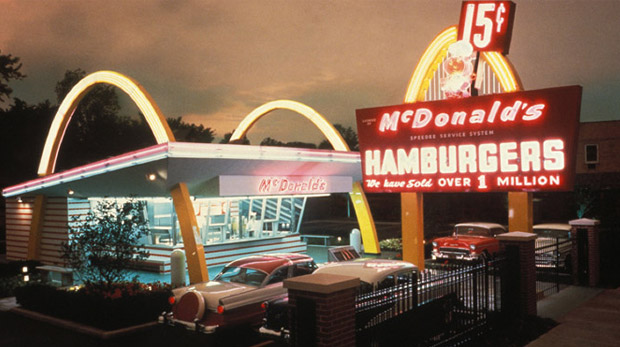 A down-at-heel salesman from Illinois, Ray Kroc spends his days cold-calling restaurant owners to sell food mixers, paper cups and milkshake machines from the back of his car. His life isn’t going well – the 52-year-old is fed up of his lack of success and his wife Ethel continually gives him pep talks to try and pick him up.

Life was about to change. One day in 1954, he cold-calls the McDonald brothers’ small burger café, where he finds they have introduced an innovative, efficient assembly-line system of preparing and serving the food – something Kroc had never seen before at any of the cafés he visited in the course of his work.

After his initial meeting with the McDonalds, Kroc’s persistence, ambition and ruthlessness shine through, as he uses their idea as the basis for today’s billion-dollar franchise chain. The film makes the brothers appear naïve – their subsequent meetings with Kroc seem to show they don’t really know what they’re doing when he expands the franchise into other states.

In fact, they don’t really agree at all with his profit-making scheme and fear it will ruin their ethical, self-contained business, which has been a labour of love until this point. After their first meeting, it’s apparent they view Kroc as a rather pitiful individual – a failed salesman who is clutching at straws to change his sad life.

However, after more meetings with him, they become swept along in his dream of launching a chain of fast food restaurants but once the documents are signed – with Kroc buying them out before McDonalds hits the big time – they seem to regret their decision. However, it’s too late to go back and the deed is done.

As the film begins, Kroc is indeed quite a sorry character, gaining sympathy as he looks for a final chance to make something of his life. As the plot progresses – and Kroc creates America’s best-known global fast food enterprise – audience reaction towards the entrepreneur begins to change.

The script was praised for expertly blurring the lines, so it became unclear whether Kroc was a hero or a villain. He is depicted as the embodiment of the American dream: always smiling, remaining positive and genuinely believing capitalism is a virtue. He views any casualties as collateral damage sacrificed for the greater good.

Released in 2017 by independent studio The Weinstein Company, critics loved the biopic, praising it for “turning capitalism into entertainment”. It was filmed documentary-style, interspersing the action with cut scenes of actual news footage of the era. Keaton won the Capri Best Actor Award for his portrayal of Kroc.

In his personal life, the real Kroc divorced Ethel and married his second wife Joan. He supported charitable causes in later life, setting up a foundation to support the treatment of various medical conditions, such as diabetes. He went on to establish Ronald McDonald House Foundation to help care for sick children and their families. Kroc died at the age of 81, in 1984.

Not all meetings can change the world – but &Meetings can give you a head start! If you’re looking to hire meeting rooms in London please call 0800 073 0499… we won’t make a meal out of the booking process.