Constructed in 1961 as part of the far-reaching after-effects of World War II, 28 years later, the unexpected and dramatic falling of the Berlin Wall and the historic moment when East met West signalled the end of the formal division of Germany which had been in place since 1949. 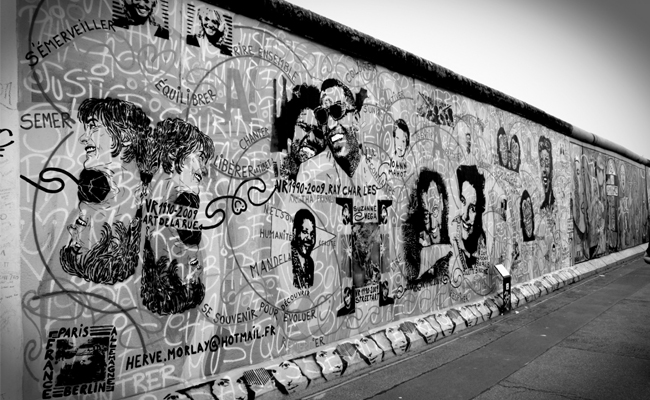 After the war, Germany’s economic infrastructure had collapsed, there were food shortages, inflation was rampant and millions of Germans were homeless. The country was split into four zones of Allied military occupation: British, French, American and Soviet.

In 1949, the Federal Republic of Germany was formed after the British, French and American zones merged, while the Soviet zone became the German Democratic Republic. While West Germany became a western democracy, East Germany became a Stalinesque Socialist state, with the government forming a centralised and dictatorial regime. Construction of the Berlin Wall began on 13th August 1961.

Why was the wall built?

Officially, the wall was built to prevent Western “fascists” from entering East Germany, but it also stemmed mass defections from East to West. After a period of relative calm after the war, tensions escalated in 1958, after the Soviets were embarrassed by the defection of almost three million refugees from east to west, many of whom were skilled people.

Around 19,000 people left the German Democratic Republic through Berlin in June 1961 and in July, a further 30,000 fled. The largest number of defectors to ever leave the East in one day – around 2,400 – fled across the border into West Berlin on 12th August.

That night, Soviet president Nikita Khrushchev gave his permission for the East German government to close the border for good in order to stop the flow of defectors. Within two weeks, the army, police and construction workers had erected the Berlin Wall.

Prior to the wall being erected, people could cross the East-West border fairly freely to go to work, to shop and to socialise, but afterwards, it wasn’t possible to travel from East to West Berlin without going through one of three checkpoints.

West Germans also suffered, as they weren’t permitted to travel to the East to visit loved ones. After a decade, a new regulated system was launched in 1971 that permitted them to buy a one-day visa to travel to East Germany.

On the East German side of the wall, measures were in place to deter escapees, including sand to show footprints, floodlights, armed guards with dogs and trip-wire machine guns. At least 171 people died trying to get over the wall, although it wasn’t impossible, as between 1961 and 1989 around 5,000 East Germans managed to escape by various means.

The falling of the Berlin Wall took place on 9th November 1989, when the East German Communist Party made an announcement that GDR residents could now cross the border freely again, following several weeks of civil unrest. One theory as to why this happened was that the Soviet Union’s economic system was breaking down and heading for an implosion, while others claimed Mikhail Gorbachev did it to allow new freedom.

Whatever the reason, the massive announcement led to excited crowds converging at the wall, some crossing into West Berlin and others bringing hammers and picks to begin chipping away at the wall as a symbol of their new freedom. Tens of thousands of people gathered there and this revolution – unlike many others throughout history – was peaceful.

Celebrations continued for 10 amazing days, with new border crossing points opening and people from both sides of the wall hugging each other, laughing and crying, with celebratory champagne being drunk in the streets. People took home pieces of the wall as souvenirs of the end of 28 years of segregation.

The 20th anniversary of the falling of the Berlin Wall was celebrated in 2009, when world leaders including US president Bill Clinton and First Lady Hilary Clinton, Mikhail Gorbachev of Russia and Nicholas Sarkozy of France travelled to Berlin.

There was a memorial service for those who had died trying to cross the wall and a meeting of the dignitaries who had been instrumental when the border first opened in 1989. There were many celebrations, such as the symbolic toppling of giant dominoes to mark the fall of the wall at Brandenburg Gate.

Most meetings will never be as celebrated as when East met West, but &Meetings can certainly help you to host the perfect occasion. To find the best meeting rooms in London, please call 0800 073 0499. We look forward to hearing from you!