In the world of TV sitcoms, many a good life-changing plot has hinged around a meeting.

One that always springs to mind is when Derek “Del Boy” Trotter meets the future love of his life in the iconic BBC series, Only Fools and Horses. Written by John Sullivan, this was possibly Britain’s best-loved sitcom of all time, running for 10 years on BBC1 from 1981 – with Christmas specials continuing until 2003. 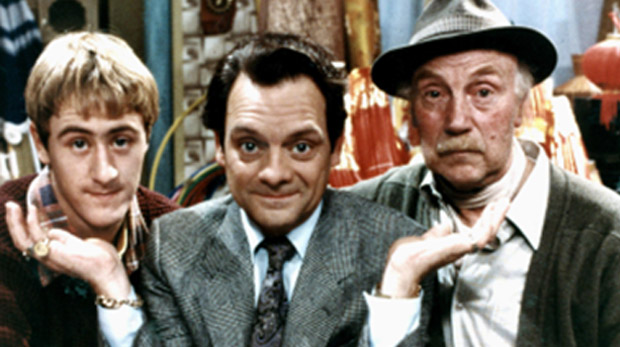 David Jason’s portrayal of market trader Del Boy endeared him to the hearts of the nation. Every viewer was willing him to succeed when he arranged to meet Raquel through the Technomatch dating agency in the 1988 Christmas episode. However, judging by Del’s usual mishaps, true love was never going to run smoothly! After telling the agency he wants a woman who’s “a bit of a sort, who likes a steak”, he is paired up with a 30-year-old actress, Raquel Turner (played by Tessa Peake-Jones). They arrange to meet under the clock at Waterloo Station. The agency tells Del it’s important he and his date are honest with each other but as Del has already said his surname is Duval – and later pretends to be a Ferrari-owning millionaire – it becomes apparent he hasn’t taken the advice too seriously.

Del makes his way to Waterloo Station, where he nervously awaits Raquel’s arrival under the clock. Clutching a large bunch of flowers, Del sees a woman dressed in red standing nearby and presumes she’s Raquel. Unfortunately, it’s a case of mistaken identity and he has accosted a prostitute. Continuing to wait, Del thinks Raquel isn’t going to turn up. However, she finally arrives late and introduces herself. They decide to continue their “getting to know you” meeting over lunch at the Hilton Hotel.

Del keeps the pretence going that he is a millionaire, while Raquel says she’s had a minor role in Dr Who as a lizard person. When Del is handed the bill, he momentarily forgets he’s supposed to be rich and is obviously flabbergasted but the date has gone well and he and Raquel arrange to go out again.

A few nights later, Del Boy and his brother Rodney (Nicholas Lyndhurst) are holding a birthday party for their Uncle Albert (Buster Merryfield) who’s singing, dancing and telling bawdy jokes. As Del proudly chats about Raquel, two police officers arrive and tell Uncle Albert he’s being arrested over a misdemeanour he apparently committed while in the Navy in 1941. However, when the female officer (which turns out to be Raquel) suddenly says, “Happy birthday!”, the revellers realise she’s a stripper who’s been booked as a birthday surprise.

It turns out that when Del met Raquel, he wasn’t the only one lying about his personal life! Del rushes out of the pub, angry and embarrassed that Raquel has lied about being an actress. He kicks his famous yellow Reliant Regal van with ‘Trotters Independent Traders’ written on the side but when Raquel follows him out, she’s equally angry that Del has lied to her, as she finds out his name isn’t Duval and that he’s a market trader rather than a millionaire! An argument ensues as Raquel points to his battered van and says sarcastically, “I suppose this is the Ferrari”, while Del retorts at least he doesn’t go around taking his clothes off for men. Raquel defends herself by saying she strips part-time to pay for her drama coaching.

Their meeting doesn’t end well, as Raquel asks Del if he still wants to see her but he replies cuttingly that he will “pay like all the other punters”. Raquel walks off without another word and Rodney criticises Del for being so harsh. He immediately wishes he could take it back but it’s too late.

So as meetings go, Del and Raquel’s was pretty disastrous all things considered. However, as fans of Only Fools and Horses will know, everything turns out all right in the end – despite some further twists and turns in the plot, which see Del Boy being arrested for mistaking a real policewoman for a stripper and telling her to “Get ’em off!”

Although we can’t promise you the belly-laughs of Only Fools and Horses, &Meetings can certainly ensure you have the best venue for your meeting! For great value meeting rooms in London, please contact us on 0800 073 0499 and we’ll be happy to help you through the booking process.