The farmer’s son from Arkansas drew on his own experiences, growing up in poverty during the Great Depression, to put genuine feelings and emotion into his music. He released 170 singles, 56 studio albums, 13 collaborations, 11 gospel albums and nine live albums and had 13 number one hits.

With 13 Grammy Awards out of 35 nominations under his belt, including best male country performance for Give My Love To Rose in 2002, Best Contemporary Folk Album in 1994 for American Recordings and the Lifetime Achievement Award in 1999, in 1977 he was welcomed to the Nashville Songwriters’ Hall of Fame and then into the Country Music Hall of Fame in 1980. In 1992, at the age of 60, he became an inductee of the Rock and Roll Hall of Fame. 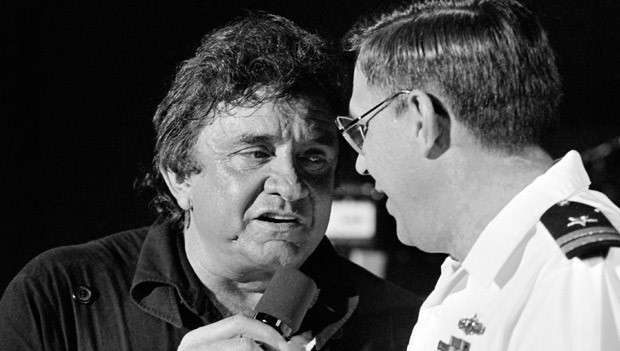 The “man in black”, so called due to his famous black stage clothes, was the only artist in history to be inducted into all three hallowed halls. He also received two posthumous honours, being inducted into the Gospel Music Association’s Hall of Fame in 2010, followed by the Memphis Music Hall of Fame three years later.

Early life
Born in 1932, the fourth of seven children, he had to work in the cotton fields with his parents and siblings from the age of five. It was a tough life during the Great Depression of the 1930s, but it shaped Johnny’s life, as he always had an empathy for the underdog and remained humble, even when he achieved superstar status.

He was in the United States Air Force from 1950 to 1954 to complete his national service. He married his fiancée Vivian after his discharge and the couple lived in Memphis, Tennessee, where Cash had a day job as an appliance salesman, playing with musical duo, the Tennessee Two, at night.

Music career
He successfully auditioned for producer Sam Phillips’ Sun Records and released his first single in 1955, Hey Porter, which was a hit in the country charts. His backing band comprised bassist Marshall Grant and guitarist Luther Perkins – formerly the Tennessee Two. They became the Tennessee Three when they were joined by drummer WS Holland.

Also released in 1955, his signature song was Folsom Prison Blues, which was number one in the American and Canadian charts – he would play it at the start of every live show. He played a lot of free shows in prisons for the inmates, where it always went down well.

His most famous songs included I Walk the Line in 1956, Ring of Fire in 1963 and A Boy Named Sue in 1969. As well as country, he also played gospel music. One of his most famous gospel albums was Hymns From the Heart, released in 1962. It was his second such offering, sung in his famous bass-baritone voice, but it had a more traditional feel than any of the subsequent gospel albums that he released later in his career.

The song was written by Albert E Brumley, the American composer who was famous for his prolific song writing in the gospel genre. The Oklahoma-born composer wrote more than 800 songs, with If We Never Meet Again being one of his most renowned.

Like Cash, Brumley was the son of an impoverished farmer, who had spent much of his early life picking cotton on his family’s farm. He had escaped poverty by attending Hartford Musical Institute in Arkansas in 1926, when he was 21.

Cash made the song his own, singing with real feeling the lyrics, “As we struggle through this world and its strife, there’s another meeting place somewhere in Heaven, by the side of the river of life.”

He had struggled through his own fair share of strife in his youth and was brought up in a religious family, as his parents were Southern Baptists – he had been baptised in the Tyronza River in 1944 by the Central Baptist Church of Dyess, Arkansas.

Cash died in September 2003, aged 71, due to complications caused by his diabetes. He has left a lasting legacy in the shape of his wonderful music.

When you’re looking to hire a suitable venue for your meeting, &Meetings can help. To book the best meeting rooms in London, phone us on 0800 073 0499 and we’ll help you through the complete booking process.