However, she made such a big impression on Presley that they kept in touch, even though they didn’t see each other for another two years. They later married. 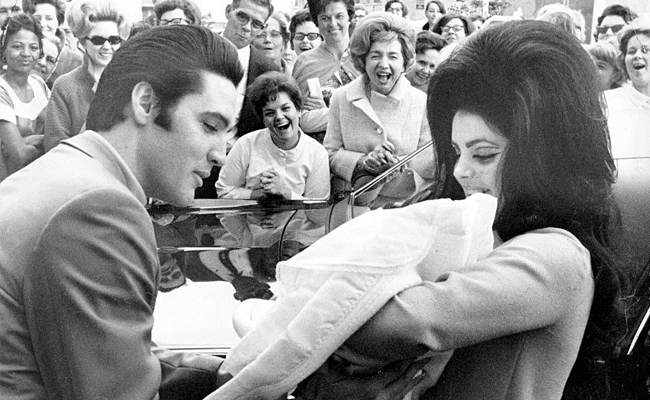 How they met
When Elvis was 25, he was serving in the US Armed Forces as part of his National Service. He met Priscilla (the daughter of a US Navy pilot) on 13th September 1959, at a party at his home in Bad Nauheim.

It was reported that Priscilla’s parents did not want her to see Elvis again after their first meeting because of the age difference and his reputation as a rock and roll star. However, they relented after speaking to him. Elvis and Priscilla spent much time together before he left Germany to return to the US in March 1960.

It was a difficult time for Priscilla after Elvis departed, as she was bombarded by the worldwide media with requests for interviews. She also received mail from Elvis’s legion of fans (some fan mail and some hate mail) and from lonely GIs who wanted a sweetheart to write to.

Once Elvis had gone, the teenager thought she wouldn’t see him again, particularly after the gossip magazines spread rumours he was dating crooner Frank Sinatra’s daughter, Nancy.

Marriage
In an interview after Presley’s death, Priscilla explained how she was more mature than most 14-year-olds and that she and Elvis initially connected on an intellectual level, because he was comfortable talking to her. He was already the king of rock and roll by 1959, with hits such as Blue Suede Shoes and Heartbreak Hotel under his belt.

After Elvis returned to the States, the couple stayed in touch by telephone, but it was the summer of 1962 before they met again. Priscilla, then aged 17, was permitted by her parents to visit him for two weeks.

They agreed to the holiday on condition she was chaperoned at all times. Elvis took Priscilla on a trip to Las Vegas during her stay.

During a second holiday at Christmas 1962, Elvis invited Priscilla to move permanently to his Graceland home in March 1963. However, her parents insisted she was to complete her education before they would agree to this and subsequently she attended the all girls’ Immaculate Conception Catholic High School in Memphis.

Initially, she lived with Elvis’s father and stepmother in their house adjacent to the Graceland estate, but after graduating from high school in June 1963, she moved into Graceland’s east wing.

Priscilla maintained that despite his reputation, Elvis always treated her with the utmost respect. She said he had old-fashioned views on marriage and they didn’t consummate their relationship until after their Las Vegas wedding on 1st May 1967, when she was 21.

The wedding had few guests and included a $10,000 breakfast reception, attended by a handful of family, friends and business associates. The newly-weds were whisked off by private jet to spend their honeymoon in Palm Springs. On flying back to Memphis, they spent a further three weeks on retreat at their private ranch.

Married life
In later interviews, Priscilla revealed she liked normal married life, without maids to pamper them. She said she enjoyed cooking, cleaning and looking after her husband herself.

She found out right after their wedding that she was pregnant. She said the pregnancy had been unplanned and she wasn’t sure if she was ready for children at such a young age and so soon after their wedding, when they were enjoying spending time together.

Lisa Marie Presley was born nine months after their marriage, on 1st February 1968.

They seemed happy as a family for the first few years of their marriage, despite media rumours of Elvis having affairs – including with some of his leading ladies. He told his wife it was just studio publicity for the films and that the talk was untrue.

Divorce
Elvis’s rock and roll lifestyle began to impact on their relationship after a relatively short period of marital bliss. After his 1968 TV special, his career took off again in a big way and he was continually playing live gigs in Las Vegas.

Priscilla was left at home with Lisa Marie and they began to drift apart. In later interviews, she said that meeting Elvis, her first love, at such a young age and marrying him at 21 meant she had grown up fast – she was a young girl who was put in adult situations.

In 1972, their relationship reached crisis point following continual rumours of Elvis’s affairs. In her 1985 autobiography, Elvis and Me, Priscilla admitted to having had a brief affair herself with her karate instructor, Mike Stone. She said she still loved Elvis deeply, but his subsequent attempts at reconciliation were too little, too late.

They separated on 23rd February 1972 and filed for a legal separation on 26th July. Elvis filed for divorce on 8th January 1973 and was said to have become obsessed about Priscilla’s affair with Stone. However, he reportedly said there was “too much pain” inside him and he decided to try and move on. Their divorce was finalised on 9th October 1973.

Aftermath
During the 1970s, Priscilla went on to become a successful dress designer to stars such as Natalie Wood and Barbra Streisand. She also became an actress who had impeccable comic timing, going on to star in the Naked Gun films and also playing Jenna Wade in Dallas.

Elvis, who was 38 when the divorce came through, unfortunately went on a downward spiral. The whole world went into mourning when he died of a heart attack at his Memphis home on 16th August 1977 at the age of 42. Reports followed that he had been taking a cocktail of prescription drugs and toxicology reports pointed to high levels of pharmaceutical drugs in his system.

Despite the tragic ending, the fascination with Elvis and Priscilla’s romance continues to this day. She has remained fiercely loyal to her late husband and continually strives to keep his memory and music relevant.

Although we can’t promise your meeting will be as rock ‘n roll as when Elvis met Priscilla, &Meetings can definitely find you the best venue! To hire affordable meeting rooms in London, please give us a call on 0800 073 0499.