Their gold medal-winning routine saw all of the judges score them six for artistic impression and they became the highest-scoring figure skaters in the history of the sport. They are so famous that when anyone mentions ice-skating, Torvill and Dean always come to mind, even though their momentous routine was 34 years ago now!

They were also World and European champions for four consecutive years, from 1981 to 1984. In preparation for the 1984 Olympics, they recruited actor and singer Michael Crawford to help coach them. He explained he was their acting tutor, advising them on how to add more emotion to their existing skating skills to genuinely tell a story. 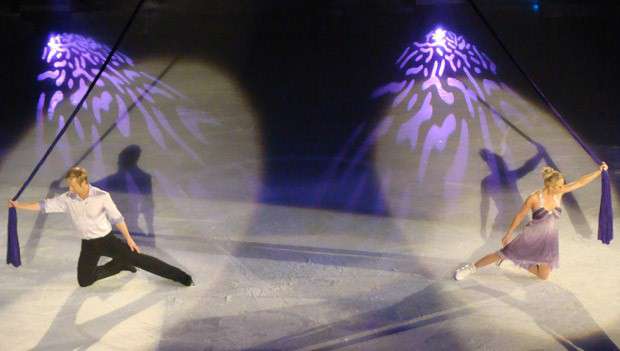 How did they meet?
When Jayne Torvill met Christopher Dean, they were both successful skaters in their own right, although skating with different partners. They were both natives of Nottingham. Dean began skating in 1968, when he was 10, while Torvill started skating at the age of eight in 1965.

Torvill skated with Michael Hutchenson in the early 1970s, winning the British Junior Pairs championship in 1972. Dean skated with Sandra Elson and they won the 1972 Ice Dance Primary GB Championship. They both skated part-time in the early years, as Torvill was an insurance clerk and Dean was a police officer.

Torvill’s successful partnership with Hutchenson ended when he decided to move to London. As she didn’t wish to move, she began skating solo. She skated at the same rink as Dean, but although they would say hello to each other, he appeared shy, so Torvill admired him from afar, later admitting she used to call him “the blond prince”!

It was Dean’s coach, Janet Sawbridge, who first tried Torvill and Dean out together in 1975, after Dean’s partner moved to London too. Torvill said he seemed reluctant to skate with her at first, as she had been skating solo for a year and he didn’t think they would be a great match.

They kept their new skating partnership under wraps at first, training at 6am, when there was no-one else at the rink. Torvill said she valued Dean’s drive and enthusiasm, as he was always full of ideas for new routines to try on the ice, even though it sometimes sounded “crazy”!

Putting them together was a stroke of genius, as in 1976, they won their first trophy together – the Northern Championship. In their first Olympic Games in 1980 at Lake Placid, they were fifth, before their 1984 triumph rocketed them to international stardom.

Did they ever plan to marry?
After their momentous victory at the 1984 Olympics, Torvill and Dean were stunned when they became celebrities, as it was something they weren’t used to. Wherever they travelled around the world, pursuing their skating career, there would be photographers waiting at every airport.

At first, according to Torvill, she would think, “Who are they waiting for?” – before realising the reception was for them, which she described as “freaky”. However, she was disappointed to find the press were more interested in whether they were in a relationship and planned to get married, rather than their skating prowess.

One of her friends has likened the media attention to the way Posh and Becks are treated today, although in the 1980s, before the days of social media, there was at least a little more privacy for celebrities.

Speculation was always rife that they were a couple in their personal life. They denied for years that there had ever been anything romantic between them. However, in 2013, during an episode of TV show Piers Morgan Life Stories, they admitted they had dated briefly in 1975, when they were both 18.

However, their romantic relationship was short-lived and after it ended, they made a conscious decision to never date again, as they realised it could impact negatively on their professional relationship.

Following their brief romance, their partnership was one that existed on the ice only, although they remain close friends and have both said that they always will be.

What are they doing now?
Torvill and Dean retired from competitive skating in 1998. They are both 60 years old now and have been involved in the television show, Dancing on Ice, since 2006.

A meeting can be the beginning of a lifelong business partnership and even a friendship. When you need a great venue for your meeting, contact &Meetings on 0800 073 0499 to hire London meeting rooms at competitive rates.