When Kermit met Miss Piggy in the opening episode of The Muppet Show, created back in 1976 by Jim Henson, it was the start of 42 years of heartbreak, drama, laughter and tears for the world’s best-loved puppets!

Love at first sight
The opening episode on 5th September 1976 saw Kermit trying to stage a musical variety show (the ongoing theme of the series) and dealing with the stars. There were also glimpses behind the scenes, as the permanently stressed frog tried to keep the often-difficult entertainers in check and made sure everything ran on schedule. 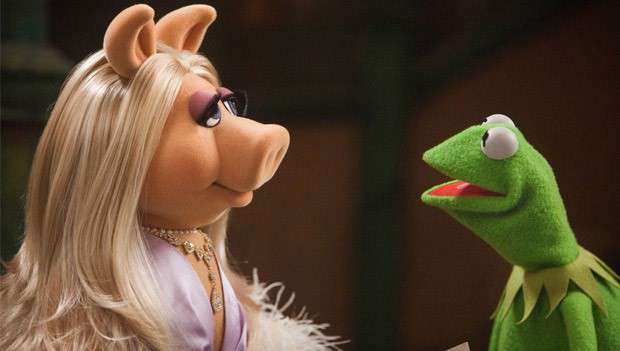 Miss Piggy was one of the regular artists who sang on the show and was well-known for her diva-like personality. She’s convinced she’s destined to be a superstar and won’t let anything stand in her way.

She can be the height of feminine allure – but then will fly into a rage almost immediately, with her familiar karate chop trademark and a cry of “hi-yah!” whenever she feels annoyed.

Poor Kermit learns this only too well. When Miss Piggy first set eyes on him, she admitted later that it was “love at first sight”.

However, if she feels someone has thwarted and insulted her (even her beloved Kermmy Wermmy) she will let rip with a swift karate blow. So when she doesn’t smother him in kisses, she sends him flying through the air with her martial arts moves!

Kermit and Miss Piggy were the central characters in the show, which was produced at ATV’s Borehamwood television studio. Running for five series, spanning over 120 episodes, The Muppet Show became a cult hit, thanks to its unique characters, crazy slapstick humour, vaudevillian wit and comic parodies.

“Fake” wedding
The path of true love didn’t always run smoothly for Kermit and Miss Piggy, even though he had likened her to the actress Debbie Reynolds in Singing in the Rain when he first met her! However, they became an item before too long – although Piggy’s continued efforts to persuade Kermit to marry her didn’t go to plan at first.

She declared her undying love for the frog and attempted to wed him many times, including trying to con him into marrying her in 1978 by preparing what Kermit called a “silly wedding sketch” for the show that he believed was “just for fun”.

However, the audience was soon made aware that the wedding scene was actually a legally-binding marriage and that Piggy had hired a real minister to preside over the ceremony!

Luckily for Kermit, he never actually said “I do”, running away before he uttered the crucial words, so Piggy was thwarted in her cunning attempt to get him to tie the knot.

Long engagement
In 1979, Piggy announced that she and Kermit were engaged, although the frog looked somewhat surprised at this news! Although The Muppet Show ended its initial five-year run in March 1981, the characters lived on through a series of movies, in addition to the Muppet Babies series from 1984 to 1991 and the new Muppets series, launched in 2015.

Piggy tries again to wed Kermit in 1984, in the film The Muppets Take Manhattan, when Kermit takes the crew to try and stage their show on Broadway.

She manages to get Kermit to the altar, but later discovers that the minister has been “defrocked” before the wedding, so it isn’t valid, much to her dismay. She and Kermit formally ended their relationship in May 1990 – perhaps the failed wedding attempts and the reluctant groom were too much for Piggy.

Of course, the star-crossed lovers reunited, but still there were no wedding bells. In 2011, when The Muppets movie was being filmed, Kermit admitted his love for Piggy on the Ellen DeGeneres Show, but denied the rumours (spread by Piggy) that they had married in secret!

He accused Piggy of “putting stories in the tabloids” and described it as a “little weird” that she had claimed they were married.

There was some confusion surrounding the plot of The Muppets film, as Kermit and Piggy each carried around one of the torn halves of their wedding photo from 1984, which hadn’t been legal.

Fans thought they had wed in 2011, but it appeared Piggy was still a lady-in-waiting!

Second break-up
In 2014, Piggy appeared to be planning another wedding to Kermit and even announced she was wearing a glamorous Vivienne Westwood designer gown. However, when pressed about how Kermit felt about the event, she said the last time she saw him, he was “still in shock”, suggesting he didn’t know about it.

However, no wedding took place and finally, in 2015 (39 years after first meeting), Kermit and Piggy announced they had split up a second time. This appeared to be more final than their earlier break-up and tiffs, as the duo (who now have their own social media accounts) officially revealed their relationship had ended.

They blamed “squabbling” for the break-up. They also said that they would continue to work together because they were “adults” and “professionals”, giving the announcement a very real feel!

A Muppets short film, released on their YouTube channel, revealed Kermit’s new girlfriend was a pig called Denise, while Miss Piggy was dating an actor.

Other people seemed to take it seriously too, blurring the lines of reality and fiction. A news article in The Telegraph newspaper claimed feminists were furious that Kermit had traded in Piggy for a “younger model”.

There had been criticisms on Twitter that he had been seen with a young, slender model, although it wasn’t clear whether she was his new girlfriend! This led to the accusation that Kermit was “anti-feminist”, since Miss Piggy was a self-confessed feminist and a plus-size artist, while Kermit’s latest companion was younger and more slender.

It appears The Muppet Show (Kermit and Miss Piggy’s relationship in particular) has become so embroiled in popular culture that the duo hit the headlines like any other A-list celebrity couple!

&Meetings is a muppet-free, professional meeting room provider, giving you access to a choice of affordable meeting rooms in London. Just give us a call on 0800 073 0499 and we’ll take the hassle out of organising your meeting!