It was 1953 when the future chart-topping stars both joined Parsons Junior High School, in Queens, New York. After they were both given roles in the school play, they soon became good friends.

Garfunkel recalled how the school had a reputation for being “where the tough kids were” and said he and Simon each recognised the other’s “uniqueness” straight away. Shy Garfunkel admitted he felt isolated from the other pupils and Simon became his only friend. 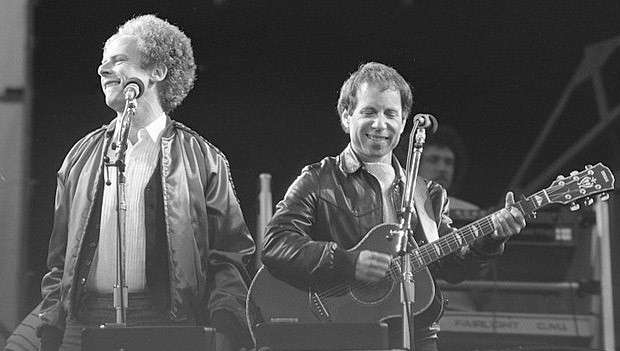 Simon later said he had seen Garfunkel singing in a school talent show before they met and reportedly thought this was a “good way to attract girls!” Both of them loved music and listened to the radio a lot, enjoying the emerging rock and roll sounds at the time.

Tom and Jerry
As youths, they formed their first band, the Peptones – a five-piece doo-wop group. They would busk on street corners, where they perfected their harmonising. Simon and Garfunkel then formed a duo called Tom and Jerry, after the famous cat and mouse cartoon characters. They began their pop career by playing at school dances.

They were so successful that they were offered a record deal at 15 and released their first single, Hey Schoolgirl, in 1957, on the independent Big Records label.

It sold 100,000 copies, mainly to the teenage girl market, peaking at number 49 in the US Billboard top 100 chart. Likened to the Everly Brothers, the boys earned around $4,000 royalties from the song while they were still students at Forest Hills High School!

The duo were also offered a spot on the famous TV show, Dick Clark’s American Bandstand, when rock ‘n’ roll superstar Jerry Lee Lewis was topping the bill. After leaving school in 1958, they attended different universities, so their dream of pursuing a music career was temporarily put on hold.

Sound of Silence
In 1963, their education completed, they reformed as a duo, initially called Kane and Garr, but later changing their name to Simon and Garfunkel. By this time, they had distanced themselves from their early pop sound and began playing the folk music that became their trademark.

They began playing regularly at Gerde’s Folk City (a live music club in Greenwich) at Monday’s open mic night, in the hope a producer would spot them and give them another record deal. Their perseverance paid off, as they were spotted by Tom Wilson, producer of Columbia records, who signed them up.

They went on to enjoy some major hits, the first being The Sound of Silence in 1964. Simon had written it when he was 21 while sitting alone at home, playing his guitar.

The first line, “Hello darkness, my old friend,” related to the fact he usually played his guitar at night, in the dark. He described it as a song about “post-adolescent angst.”

Mrs Robinson
Their next massive hit was Mrs Robinson in 1968. The song had apparently been called Mrs Roosevelt in the beginning and the lyrics suggested it was written about Eleanor Roosevelt, the former first lady of the US and wife of President Franklin Roosevelt.

However, after the song had been included in the soundtrack for the film, The Graduate, Simon and Garfunkel changed the name to Mrs Robinson – the name of the leading female character in the movie. Mrs Robinson was their second number one hit after The Sound of Silence.

It won the Grammy Award for Record of the Year and in 2004, it was voted number six in the American Film Institute’s 100 Years 100 Songs list of the top songs in American cinema.

Career highlights
Simon and Garfunkel continued to sing as a duo until 2010, releasing five studio albums, 15 compilation albums, four live albums and 26 singles. Perhaps their most famous album was Bridge over Troubled Water, released in 1977, which was voted number 51 in Rolling Stone magazine’s list of the 500 greatest albums in history. It sold in excess of 25 million copies and was certified eight-times platinum.

A crowd of half a million people flocked to their free concert in Central Park, New York, in 1981. They also won 10 Grammy Awards and were inducted into the US Rock and Roll Hall of Fame in 1990.

A meeting can forge monumental relationships that last a lifetime!

Contact &Meetings to rent purpose-built meeting facilities in London that will accommodate two to 100 people. Offering flexible seating layouts, LCD TV screens, wifi and AV equipment, when you need the best meeting venue, you can surely rely on us!