Their show was a historic part of British popular culture and they were probably the best-loved double-act ever produced on British shores.

It was a chance meeting during the Second World War that launched their long and illustrious career, which spanned the stage, television and films. Both stars had enjoyed showbusiness careers of their own before teaming up for the successful partnership that lasted for the rest of their lives. 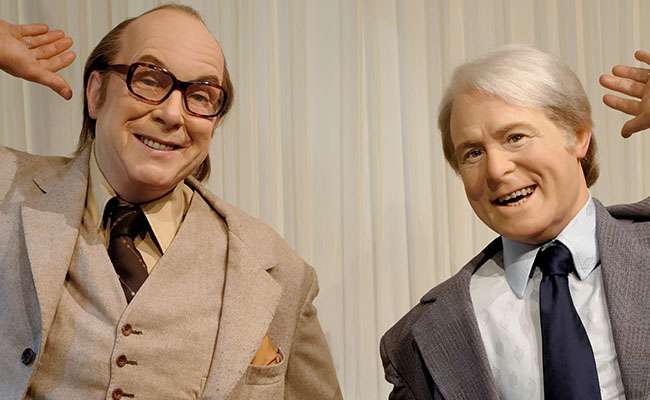 Born Ernest Wiseman on 27th November 1925, in Bramley, Leeds, Ernie Wise – his stage name – was the eldest of five children. He entered the entertainment business at the tender age of eight, when he appeared in the music hall as an actor and singer in 1933 with his father Harry under the name, Bert Carson and His Little Wonder.

In 1938, young Ernie was taken under the wing of talent spotter Bryan Michie, who recommended him to the famous bandleader and impresario Jack Hylton. This led to Ernie forging a career in variety theatre and radio, featuring on British comedian Arthur Askey’s Band Waggon radio show as the “British Mickey Rooney” in 1940.

Eric Morecambe was born John Eric Bartholomew on 14th May 1926, in Morecambe, Lancashire. He later made Morecambe his stage name. His mother Sadie worked long hours as a waitress to pay for Eric’s dancing lessons and he won several talent contests as a youngster.

In 1940, the prize for winning a talent show was a chance to audition for Jack Hylton. The audition was a success and three months later, Hylton signed 14-year-old Eric to join the Youth Takes a Bow revue at Nottingham Empire.

At the same time as Eric joined Youth Takes a Bow, Ernie, then aged 15, had been signed up separately by Hylton to take part in the same show. The two of them became friends and launched their fledgling double act for the first time. However, the worsening of hostilities during World War II – and many young men joining the Armed Forces – led to the show closing and Eric and Ernie went their separate ways.

Skip forward to 1946 and the two of them again found themselves on the same bill, this time at the Swansea Empire. They immediately resumed their double act, which took off in a big way in variety. They were soon appearing at many venues around the country, including the Windmill Theatre and the Glasgow Empire.

Morecambe and Wise soon progressed to radio, followed by their first TV appearance in 1954 in a show called Running Wild. In 1959, they were top of the bill in the BBC’s popular old-time variety show, The Good Old Days, in the Boxing Day special edition.

Their first major TV series was Two of a Kind, which was broadcast on ATV between 1961 and 1968. Their partnership evolved so that Eric played the comedy role and Ernie the straight man in a series of hilarious stand-up sketches.

Subsequently, they enjoyed a series of hugely successful television shows, teaming up with writer Eddie Braben at the BBC in 1968. These were the comedy duo’s glory days, with The Morecambe and Wise Show running until 1977. They became a Christmas institution in their own right, with viewers traditionally settling down to watch the Morecambe and Wise Christmas special each year.

They performed many famous sketches that remain YouTube hits to this day, such as the legendary breakfast sketch when they danced around the kitchen preparing breakfast to the tune of The Stripper, which has had 1.1 million views.

The familiar theme song of their show, Bring Me Sunshine, still evokes memories of their comic routine to this day.

The double act even made five comedy films: The Intelligence Men, Spylarks, That Riviera Touch, The Magnificent Two and Night Train to Murder.

The partnership lasted until Eric Morecambe’s untimely death from a heart attack in 1984 at the age of 58. Ernie Wise went on to appear on the TV panel show, What’s My Line and in several West End plays, before retiring from show business in 1995 on his 70th birthday, after suffering two strokes. He died in 1999.

The Morecambe and Wise legacy lives on, not only through footage of their many shows, but also through statues that have been erected at their birthplaces in their memory – one of Ernie in Morley, West Yorkshire, and one of Eric in Morecambe, Lancashire.

Meetings can forge lasting partnerships for the future that can change your life. If you’re looking for the best meeting venues, contact &Meetings for great value meeting rooms in London on 0800 073 0499. We’ll be happy to help you through the booking process.