When the two legendary comedians met, it was like a sketch from The Two Ronnies – except it was real life! Ronnie Corbett described the circumstances in a newspaper interview many years later, describing it as a “classic Two Ronnies set-up.” 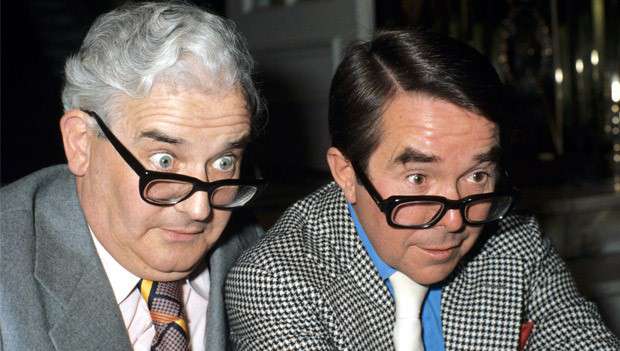 Barker: From stage to TV
Prior to their memorable meeting in 1963, the two comics had enjoyed successful solo careers. Born in September 1929 in Bedford to Leonard and Edith Barker, Barker developed a love of theatre as a child. He enjoyed movies and attending plays with his family.

Despite being a bright student at the City of Oxford High School for Boys, he left as soon as he could because he felt what he was being taught would be of no use to him in life. He disliked his first jobs as a trainee architect and then a bank clerk.

However, he took up amateur dramatics in his spare time, working as a stage manager and actor and eventually giving up his salaried job to join Manchester Repertory Company. After many stage roles, he moved into radio and television work in 1956. His first role was a bit part in Glenn Melvyn’s comedy show, I’m Not Bothered, in 1956.

His first radio role was playing Lord Russett in Floggit’s – a drama that ran for three series, from 1957 to 1959. From 1959 to 1977, he also played Able Seaman Johnson and Lieutenant-Commander Stanton in around 300 episodes of sitcom, The Navy Lark, on BBC Radio.

He featured in The TV Lark – a spin-off, following the main characters’ life in Civvy Street after leaving the navy. He also played several roles alongside June Whitfield and Jimmy Edwards in the comedy show, The Seven Faces of Jim, in 1962.

Corbett: RAF officer to actor
Born in Edinburgh in December 1930, to William and Annie Corbett, the young Ronnie knew on leaving Edinburgh’s Royal High School that he wanted to be an actor. He began performing amateur theatre productions with his church youth club.

He took a job with the Ministry of Agriculture, but soon went to serve his National Service with the RAF, where he was the shortest man in the armed forces at only 5ft 1in. Starting out as an aircraftman 2nd class, he became a pilot officer in May 1950 and was then promoted to flying officer in September 1952.

However, he left the Armed Forces to pursue a career in show business, becoming a regular on Crackerjack in its early years. He had roles in several films, including You’re Only Young Twice in 1952 and Rockets Galore in 1957.

Starring alongside a young Bob Monkhouse, his stage work included the 1963 musical, The Boys from Syracuse, at the Theatre Royal, Drury Lane.

When Ronnie met Ronnie…
Barker and Corbett’s first meeting was recalled by Corbett in an interview. At the time, in 1963, Corbett was working behind the bar at the Buckstone Club in Soho to supplement his income when acting jobs were scarce. He recalled Barker walking up to the bar.

Corbett greeted him with, “Evening, sir – what can I get you?”, describing it as like the beginning of a classic Two Ronnies sketch. Barker had also described the same meeting, claiming Corbett’s diminutive stature meant he had to stand on two boxes to reach the spirits optics.

Barker always maintained one of the boxes had “Agnes” printed on the side and the other “Champ” – according to Corbett, the boxes were labelled “champagnes”. He said this was a “typical bit of Barker wordplay!”

Working together
Following their initial meeting in the Buckstone Club, Corbett and Barker found themselves working together on The Frost Report – a satirical sketch show broadcast by the BBC in 1966 and 1967.
The other cast members and writers were mainly Oxford and Cambridge graduates, many of whom had come through the Footlights’ ranks – Cambridge University’s amateur dramatics club.
Corbett later said he and Barker, as two grammar school boys who hadn’t gone on to university, were drawn together and it wasn’t long before they were thought of as a comedy duo.

The Two Ronnies
Their blossoming comedy partnership led to the BBC TV comedy show, The Two Ronnies, which ran from 1971 to 1987. Corbett and Barker performed sketches and musical numbers, while Corbett presented his famous monologue every week as he sat in a large armchair that emphasised his small size.

The duo bounced off each other with their down-to-earth, easy wit that drew viewers to them. Among their most famous sketches was the scene where Corbett played a hardware shop owner and Barker was a customer. The ongoing joke of whether he wanted four candles or fork handles had audiences in stitches!

Another awesome sketch was called Crossed Lines. It involved Barker and Corbett playing two strangers having individual telephone conversations from public phone booths. The sketch was cleverly structured, so it sounded as if they were answering each other, rather than the people on the other end of the line!

So, it’s goodnight from me…
… and it’s good night from him. Good night!

After The Two Ronnies finished, both comedians appeared in their own sitcoms. Corbett starred in Sorry as meek librarian Timothy Lumsden, while Barker starred in Prison comedy Porridge and Open All Hours as a miserly shopkeeper.

Not all meetings forge lifelong business partnerships, but &Meetings can certainly give you the best possible platform in our affordable meeting rooms in London… the rest is up to you! Call us on 0800 073 0499 and we’ll be happy to assist you through the booking process.