So, what’s the best way of going about this?

Perhaps a more interesting way of approaching the challenge is by knowing what NOT to do.

Have you ever watched the BBC TV series, The Office? The spoof fly-on-the-wall documentary stars comedian Ricky Gervais as David Brent, the inept and cringeworthy manager of Wernham Hogg Paper Company’s Slough branch. Brent has just about the worst management skills that anyone has ever seen, so if you watch one of the fictional meetings that he’s chairing, you’ll have a clear idea of the things you should never, ever do in real life. 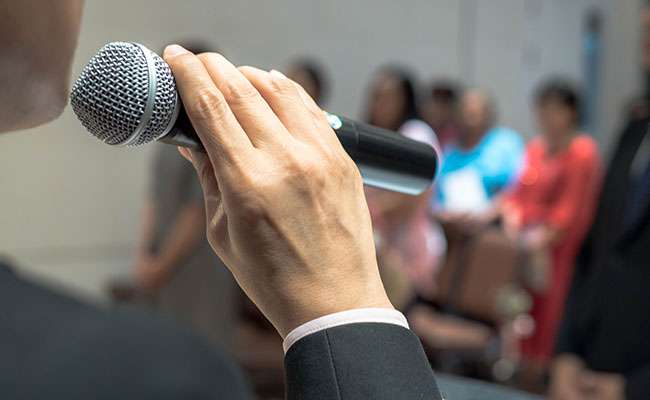 Never try too hard to be humorous: you can be upbeat, witty and interesting but try to avoid cracking jokes. If you’re in any doubt about this advice, take heed of Brent’s embarrassing attempts at humour, when he tells attendees at a meeting that they should laugh more. Even watching it on TV makes you squirm in your seat, as Brent bursts into a fake laugh in front of a sea of blank faces.

Always deal with discord diplomatically and swiftly to avoid disruption. In an ideal world, personality clashes wouldn’t happen but in reality, they’re bound to rear their ugly head at some point. If two staff members start a heated debate amongst themselves during a meeting, it can detract from the business in hand and leave others looking at their watch and wondering when it will all be over.

Brent fails to get a grip of the situation when two of his employees, Tim Canterbury and Gareth Keenan, show an obvious personal dislike for each other. This clouds their professional conduct but rather than nipping it in the bud swiftly, Brent lets it rumble on, until it interferes with staff morale and productivity for everyone else.

Avoid playing what you think is “motivational” music during a meeting, in the mistaken belief it’s what “the kids” want. It’s not. Absolutely nothing could be more cringeworthy than Brent’s hand-clapping, hip-gyrating routine to ‘You’re Simply the Best’ as he tries to motivate his audience.

Finally, be the manager first and a friend second. If you’re trying to run a meeting but the business is interspersed with attempts at familiarity and over-friendliness with the staff, it won’t work. Rather than trying to be popular, establish professional boundaries from the onset. Sometimes, you have to make tough decisions and say things that colleagues don’t want to hear. While it’s vital to establish a certain camaraderie with colleagues, a good manager must be respected too. Otherwise, you may find no-one is listening to you.

&Meetings always comes up trumps when it comes to the best meeting rooms in London. Please call 0800 073 0499 and we’ll be happy to help you through the booking process.