The phenomenon occurs when the moon moves between the sun and the earth. The moon blocks out the sun’s rays and casts a shadow on parts of the earth, eclipsing all or part of the sun.

The new moon phase is important, from the perspective of a solar eclipse. This is the point in the moon’s orbit when it passes between the sun and the earth. A total solar eclipse can happen only at a new moon, when other types of alignment occur as well. 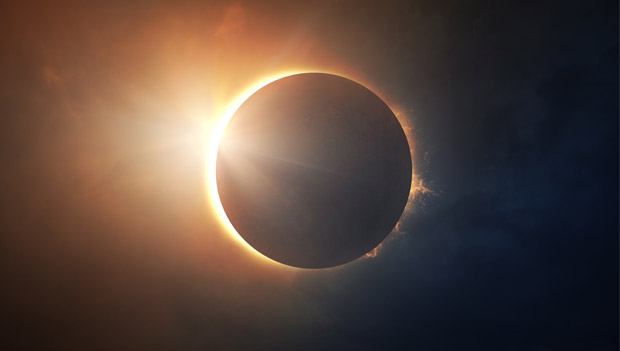 The moon’s orbit is tilted by around five degrees from the earth’s orbit around the sun.

Most of the time, the new moon will cast its shadow either below or above the earth. The moon’s orbit will meet the plane of the sun and the earth at two points, known as nodes. Over a period of time, the moon’s orbital nodes gradually drift.

This means that a single location on the earth’s surface might not experience a total eclipse for hundreds of years, when everything is in the necessary alignment. This makes a solar eclipse (and in particular, a total eclipse) a rare occurrence and something that people look forward to experiencing.

What are the different types of eclipse?
The distance of the moon from the earth determines the type of eclipse we will experience. When the moon is close to the earth, blocking all of the light from the sun, a total eclipse will occur.

When the moon is further away, which makes it look smaller as we view at it from the earth, it still blocks the sun, but not all of it. This phenomenon is called an annular eclipse, when a ring of the sun’s light can still be seen around the moon.

This alignment normally occurs every couple of years, but it’s visible only from a small area on earth, which is why many people won’t remember seeing it that often.

A partial solar eclipse occurs when the moon partly obscures the sun, casting only its penumbra (the partially shaded outer region) on the earth.

The darkest point of a solar eclipse is visible from only a small area. In most places, total and annular eclipses look like partial solar eclipses, due to our vantage point on the earth’s surface.

How long does an eclipse last?
Eclipses can last for varying amounts of time. The total solar eclipse that occurred on 21st August 2017 was a relatively short one, lasting for two minutes and 43 seconds. Around 70% of eclipses last for longer than this.

Scientists say the longest total eclipse in a period of 12,000 years will occur on 16th July 2186 and will last for seven minutes and 29 seconds. It will be seen from Colombia, Venezuela and Guyana.

The total eclipse of 2017 created great excitement in the United States, where it was the first total eclipse to cover the whole of America in 100 years.

An eerie silence descended as the eclipse began. According to scientists, the birds would be confused, reacting as if a severe storm or nightfall was impending. They preened briefly, sang quiet evening songs and tucked in to roost as the darkness grew. Crowds of people gathered in the streets, whooping and cheering, as the eclipse began.

Is it safe to watch an eclipse?
Experts advise people never to look directly at the sun, either during an eclipse or in general, without protective eye-wear, as the brightness can permanently damage your eyes due to its UV radiation, which can burn the retinas.

The safest way of watching a total solar eclipse is by wearing special eclipse glasses, or by projecting an image of the eclipsed sun using a pinhole projector.

People can suffer eye damage during an eclipse by staring directly at the sun because they are lulled into a false sense of security, due to the darkness around them.

Normally, we wouldn’t stare at the sun continually for several minutes because it would hurt our eyes, but during an eclipse, we may do so without realising it’s still just as bright and we’re still causing damage.

After the total eclipse of 2017, the Google search engine noted a massive increase in people looking up the search term, “my eyes hurt eclipse”.

Upcoming solar eclipses
The next total solar eclipse is due to take place on 2nd July 2019 and will be visible in North America, much of South America and across the Pacific region.

An annular solar eclipse will occur on 26th December 2019 and will be visible in eastern Europe, across much of Asia, in northern and western Australia, east Africa, in the Pacific region and across the Indian Ocean.

Nothing is quite as spectacular as the phenomenon that occurs when the sun meets the moon, but when you need a top-class venue for your meeting, we can help! &Meetings has a wide range of rooms for hire in London. Give us a call on 0800 073 0499 and we’ll help you through the booking process.