The space flight had been launched from the Kennedy Space Centre in Florida on 16th July 1969, at 9.32am. Four days later, on 20th July, American astronauts Neil Armstrong and Buzz Aldrin met the moon on what was NASA’s fifth manned mission of its Apollo programme. 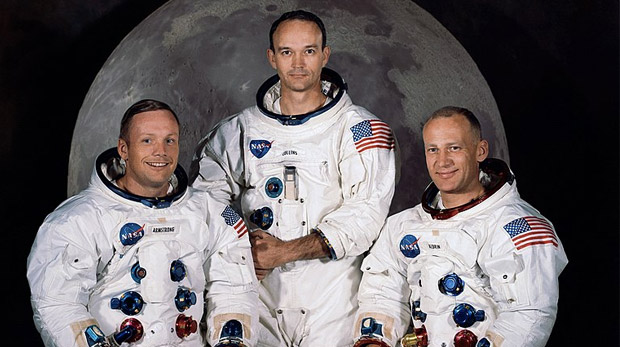 Historic landing
Armstrong, aged 38, was officially the first man on the moon, stepping out of the spacecraft at 2.56am, followed by 39-year-old Aldrin around 20 minutes later. The third astronaut, Michael Collins, 38, piloted the command module, Columbia, for two-and-a-quarter hours while his fellow astronauts completed their moon exploration.

As Armstrong prepared to be the first human being to walk on the moon, watched by more than half a billion people on TV, he famously said, “That’s one small step for a man, one giant leap for mankind.”

Armstrong and Aldrin collected 47.5 lbs of lunar materials to take back to earth, taking photographs as they walked on the moon. They also planted an American flag, saluting the famous Stars and Stripes and leaving a plaque marking their achievement, stating, “We came in peace for all mankind.”

The crew successfully arrived back on earth on 24th July, splashing down off the coast of Hawaii. The challenge had been met and men from Earth had successfully walked on the moon and returned back home safely.

The total cost of the whole Apollo programme was said to be $25.4 billion, according to a report given to Congress in 1973. In an interview after the momentous landing, Armstrong praised the “hundreds of thousands” of people who had been behind the successful project. He called the mission the “beginning of a new age.”

Armstrong’s early career
Becoming an astronaut wasn’t easy, requiring years of dedication. Born on 5th August 1930, Armstrong was a graduate of Purdue University where he had studied aeronautical engineering. He had seen action in the Korean War, flying the Grumman F9F Panther and being hit by anti-aircraft fire in 1951, when he successfully bailed out.

Following the war, he became a test pilot at the National Advisory Committee for Aeronautics, flying the Century Series fighters and the North American X-15. He participated in the US Air Force’s X-20 Dyna-Soar and Man in Space Soonest space flight programmes.

After joining the NASA Astronaut Corps in 1962, he made his first space flight commanding Gemini 8 in March 1966, with pilot David Scott. During his subsequent training for Apollo 11, he ejected from the Lunar Landing Research Vehicle in the nick of time, moments before it crashed in a ball of fire.

Aldrin’s war heroism
Aldrin, born Edwin Aldrin on 20th January 1930, graduated from West Point in 1951, attaining a Bachelor of Science degree in mechanical engineering. He was known as Buzz from childhood, as one of his siblings couldn’t say “brother” and would say “buzzer” instead.

Aldrin also saw active duty during the Korean War, when he was a second lieutenant in the US Air Force. He was a jet fighter pilot who flew 66 combat missions in the F-86 Sabre.

He famously took photographs of a Soviet pilot ejecting from his damaged aircraft, which appeared in Life magazine on 8th June 1953. After the war, he worked at Nellis Air Force Base in Nevada as an aerial gunnery instructor. He also flew F-100 Super Sabres when he became flight commander of the 22d Fighter Squadron.

In 1963, he earned a degree in astronautics at the Massachusetts Institute of Technology, where he had been a student since 1959. He became a member of NASA’s astronaut group in October 1963 and during his preparation for the Apollo 11 mission, he demonstrated how astronauts could work outside their spacecraft, setting a record of two hours and 20 minutes.

Worldwide legends
Following their successful moon landing, Armstrong and Aldrin became celebrities, achieving legendary status all over the world. However, Armstrong’s family described him as a “reluctant hero” who remained humble. He shunned approaches from various political parties to enter politics.

He became Deputy Associate Administrator for Aeronautics at NASA’s Headquarters, where he had the responsibility of co-ordinating research and technology work in aeronautics.

Aldrin, now 88, returned to the Air Force in a managerial role following his moon landing. He founded Share Space Foundation – a non-profit organisation that aims to advance space exploration and affordable space flights. In 2015, he established the Buzz Aldrin Space Institute in Florida.

Were they friends?
The media was continually filled with stories about their relationship – and many speculated that they didn’t get on at all. However, following Armstrong’s death in 2012 at the age of 82 after heart bypass surgery, Aldrin refuted the rumours.

Telling reporters, “Yes, I think we were friends,” he described Armstrong as “extraordinary in his talents” – a man who was “more than capable” and who was skilled at making judgments. He said although Armstrong wasn’t a “back-slapping, easy-to-get-along-with” kind of person, they were still friends. They became close while working on the Apollo mission, according to Aldrin.

The Space Centre, Houston, is marking the 50th anniversary of the moon landing by hosting a travelling exhibition, called Destination Moon: The Apollo 11 Mission. It includes memorabilia such as the command module of the rocket (the only part that returned to earth), Aldrin’s visor and gloves and Collins’ survival kit and star chart. The exhibition is also travelling to Pittsburgh, Saint Louis and Seattle during 2019 and 2020.

For meetings that really make a difference, contact &Meetings on 0800 073 0499 and we’ll make sure you enjoy one of the best meeting rooms in London – and it will be just one small step from public transport!