The story behind the song is a fascinating one, since it may never have come about at all, had the artists not met by chance in Switzerland. Although Queen and Bowie were based in London at the time, their paths seldom crossed. They were acquaintances, rather than friends. 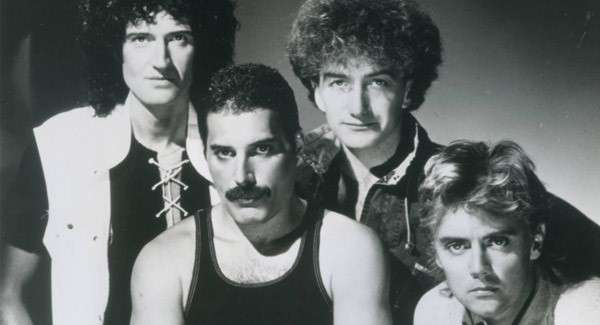 Friendly gathering
Bowie, who was 34 at the time, was living in the small town of Montreux in Switzerland. The town was home to a small recording studio, Mountain Studios, which Queen had used a lot in the 1970s. They liked the studio so much that they bought it and used it a lot for recording, up until the time of Freddie Mercury’s death in 1991.

Back in October 1981, the four members of Queen – Mercury, Roger Taylor, John Deacon and Brian May – were in their Swiss recording studio, when Bowie popped in to see them out of the blue.

According to May, Bowie’s home was near the recording studio and because the artists knew each other “a little”, he decided to say hello.

They decided to jam together, as they thought this was the best way to get to know each other better. Bowie ended up recording some backing vocals for a song called Cool Cat, but in the end, they weren’t used, as he wasn’t happy with them.

Birth of Under Pressure
However, during the jamming session, Under Pressure was born. May described it as being written as a result of “kicking around a few fragments of songs we all knew.” He said they all began to get excited when Deacon started repeatedly playing a riff that involved six notes that were the same, followed by one lower note.

They retired to a local restaurant for food and drink and on returning to the studio, Bowie asked, “What was that riff again?”

Deacon couldn’t remember 100% the notes he had played, so May said Bowie went over and put his hand on Deacon’s guitar, saying, “No, I think it was like this!”

May described it as a “tense moment” because Deacon didn’t like anyone telling him what to do – and he certainly didn’t let people put their hands on his guitar! However, he was good-natured about the advice from Bowie and they began jamming again, using the riff as the starting point.

May said that Queen’s normal style of writing was to go away and form the song, mapping out a structure before playing it, but Bowie urged them to just carry on playing “instinctively”, adding, “Something will happen!”

Sure enough, it did, with May adding what he described as a “tinkling” guitar riff to Deacon’s bass riff. Bowie said it would be better played on a 12-string, so this was overdubbed later. May said all the musicians “mucked in” to develop the track, with a verse followed by a quieter part, building up into the song’s climax.

Writing the lyrics
The result was Under Pressure – which May initially thought sounded like The Who in places, so Bowie said determinedly, “It won’t do by the time we’ve finished!”

The lyrics were written in an unusual way, using a “democracy” style suggested by Bowie – this meant everyone went into a recording booth individually, to listen to the track and write down the words that came into their head.

Then, they all got together, listened to everybody’s lyrics and made what May said was a compilation “best of” vocal track. This was the basis for the final vocals, with Mercury adding his “De Dah Day” lyrics at the end.

They initially called the song People on the Streets, as that was part of the first draft of lyrics. Reconvening at the recording studio the next day, May said Bowie took over the track, as he knew exactly what he wanted from it. May said the singer was “having a genius moment”, so rather unusually, the Queen members left him to it, rather than having any further input.

Bowie added the lyrics which focused on the words “under pressure”, adding them to the existing lyrics written by everyone. May said it was very unusual for Queen to relinquish control of one of their own songs, but they were happy to have done so, considering the finished result and the massive success which the song enjoyed.

Video
The song’s video seemed very arty, as neither Bowie nor Queen appeared in it. Instead, it featured a general theme of pressure, with footage of traffic jams, packed commuter trains, riots, explosions and cars being crushed, edited together by director David Mallet with footage from 1920s silent films, including Dr Jekyll and Mr Hyde.

Both Queen and Bowie had touring commitments and they didn’t have time in their schedule to make and star in a video. However, live versions of the song have featured all of the artists together on stage.

The video wasn’t without controversy, as Top of the Pops refused to show it because of the footage of violence in Northern Ireland, so a performance featuring the show’s dancers in a choreographed routine was broadcast instead.

Although a joint project, only Queen performed the song at their live shows for many years. After Mercury’s death, Bowie and Annie Lennox sang it as a duet, backed by Queen, at the Freddie Mercury Tribute Concert in 1992. Afterwards, Bowie began performing the song at almost every live show.

Today, it is recognised as a classic, with its familiar bass riff (written by accident) known the world over!

Some meetings can have life-changing consequences – get yours off to an unpressured start by hiring your meeting room through &Meetings!

When you’re looking for great value meeting rooms, we have a fantastic range of options at the most competitive rates. Give us a ring on 0800 073 0499 and we’ll help you through the booking process.