Introducing Batman comics
Detective Comics (DC) introduced vigilante superhero Batman in 1939. While the early Batman stories teetered towards the dark side, with a hint of violence, writers Bob Kane, Bill Finger and Jerry Robinson decided to lighten things up a little and appeal to younger audiences by introducing a character that would become Batman’s sidekick. This character would also serve to introduce spoken interaction, enabling Batman to talk to someone, rather than focusing stories on just his thoughts.

It was about a year after Batman first came onto the scene that his sidekick, Robin, was created. Known as Robin the Boy Wonder (taking inspiration from The Adventures of Robin Hood), he made his first appearance in 1940, in Detective Comic #38. 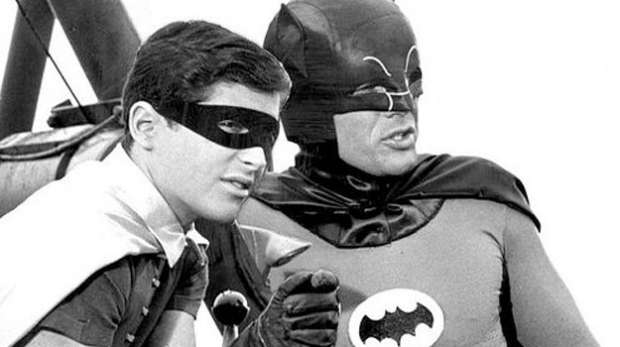 The creators wanted Robin and Batman’s partnership to be akin to Sherlock Holmes and Watson, or a father/son-like relationship, and it soon became apparent that fans were pleased with this change of direction. Sales of Batman comics doubled once Robin arrived.

Dick Grayson
Robin has enjoyed different incarnations over the years, but the first character to play the Boy Wonder was known as Dick Grayson. Arguably, Dick is also the most famous of the Robin characters, having played the role from 1940 until the 1980s. He has also been ranked at number 11 of the Top 100 Superheroes Of All Time.

Although Dick was Batman’s understudy for most of his career, he went on to become a superhero in his own right. As leader of the Teen Titans, he spawned a new identity, Nightwing. On some occasions, Dick even assumed the role of Batman.

So popular was Dick that he featured in his own Star Spangled Comics, from 1947 to 1952.

The meeting of Batman and Robin
Dick is portrayed as an eight-year-old acrobat in the comics, performing as a family act at circuses that goes by the name of the Flying Graysons. Tragedy strikes, however, when Dick’s parents are murdered by a gangster named Boss Zucco, who has been extorting money from the circus.

Batman, played by his alter ego, Bruce Wayne, arrives at the circus to investigate the crime – and this is how Batman first meets Robin. He takes the young lad under his wing, teaching him skills of martial arts, gadgetry and detective work. Together, they uncover Zucco’s crimes, and many others to follow.

Robin is given a costume consisting of a red tunic, yellow cape, a domino mask, green gloves, boots and briefs, and a utility belt.

Other Robins
After Dick hangs up his iconic costume, other Robins who partnered up with Batman included Jason Todd, Tim Drake, Stephanie Brown and Damian Wayne. As of 2012, Tim Drake became the leader of the Teen Titans superhero group.

Media adaptations
It’s not just comics where Batman and Robin have made appearances.

Burt Ward played Robin in the 1966-68 series, with Adam West starring as Batman. The pair endured a friendship that spanned over 50 years, with Burt citing Adam as the very best of all the Batman actors.

In 1989, the award-winning film, Batman, was released, with Michael Keaton starring as Batman. Keaton also reprised the role in Batman Returns in 1992. Val Kilmer stepped in to play the lead role in Batman Forever in 1995, while George Clooney played Batman and Chris O’Donnell starred as Dick/Robin in the 1997 flick, Batman & Robin.

Batman hit the big screens again at the turn of the new century, with Christian Bale starring as Batman in the 2005 blockbuster film Batman Begins. Sequels followed, with The Dark Knight in 2008, and The Dark Knight Rises, in 2012.

While the moment Batman met Robin might go down in comic book history, you can also enjoy memorable and rewarding meetings with new and old clients alike. Get your meeting venue spot-on, by choosing to hire affordable and well-equipped rooms from &Meetings.