A report published last week  has revealed that plans for the new ‘Garden Bridge’ have received overwhelming support from Londoners.

The £150m scheme, a 1,214ft pedestrian bridge spanning the Thames between Temple and Southbank, was the brainchild of actress Joanna Lumley. 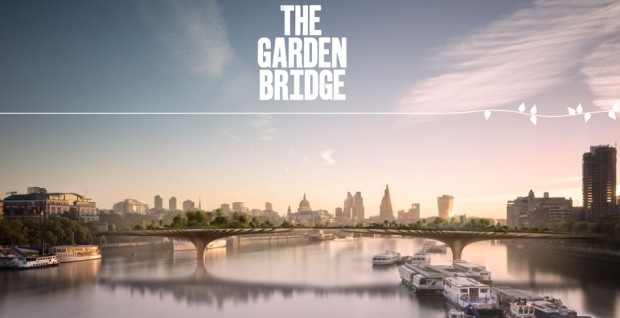 The design of the bridge will actively encourage Londoner’s to meander its pathways between shrubs and trees, tempting visitors to linger amid its leafy shade, also providing an ideal rendezvous point.

The stunning new public garden and pedestrian crossing, was designed by Thomas Heatherwick and will provide a vital new route between north and south London, to be used and enjoyed by all.

Adding to London’s diverse and rich horticultural heritage, the Garden Bridge will integrate a new kind of public space into the fabric of the city and subject to planning permission from both Westminster and Lambeth borough councils, will open in 2017.

The Garden Bridge Trust will be buoyed by the support from local residents with 86% of those surveyed all for the new scheme which has already been promised £30m of Government funding, £30m from Transport for London and a further £30m from private donors. An additional £60m is now needed to make the vision a reality.