Fourteen years earlier, John, then aged 26, was riding high as one of iconic Liverpool band, The Beatles, who were at the pinnacle of their fame. Yoko was a 33-year-old Japanese artist, peace activist and singer-songwriter, who was exhibiting some of her work at the Indica Gallery in London. 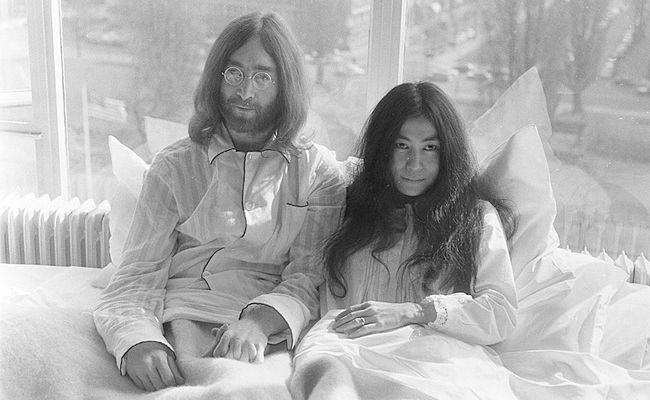 She had travelled to the UK to meet the artist and political activist Gustav Metzger, as she had been invited to take part in his Destruction in Art Symposium in September 1966. John was said to have viewed her conceptual art exhibits but was unimpressed initially.

Inspired by positivity
Legend has it that he didn’t like many of the exhibits, but one, entitled Ceiling Painting, intrigued him. Visitors were invited to climb a ladder which had a spyglass on the top. On doing so, they could clearly see the word “yes” painted at the top.

John reportedly said he was intrigued by the positive message, in an era when most conceptual art was anti-everything. He began chatting with Yoko as he viewed an exhibit called Hammer and Nail.

Apparently, Yoko didn’t know who he was and she explained he could pay five shillings – the equivalent of £4.40 in today’s money – to hammer a nail into a wooden board to create his own piece of art.

John declined, but afterwards, Yoko described it as a “strange situation”, as she felt very attracted to him, although he was married to his first wife Cynthia at the time.

Divorce
John and Yoko kept in touch with each other, but Cynthia, his wife since 1962, became suspicious when Yoko began telephoning their home. However, John said she was just trying to obtain sponsorship for her artwork.

In early 1968, The Beatles made their famous trip to India and it became apparent John had feelings for Yoko. He made reference to her in a song he wrote called “Julia”, in which he said, “ocean child calls me”, meaning Yoko.

In May 1968, Cynthia went on holiday to Greece and John invited Yoko to join him at his marital home. This was believed to be the beginning of their infamous affair. Cynthia returned home and found them together and filed for divorce soon afterwards. Once the divorce was finalised in November 1968, John married Yoko at a registry office in Gibraltar in 1969.

Artistic collaborations
The newly-weds recorded several musical collaborations together including Two Virgins, Happiness is a Warm Gun and the famous Give Peace a Chance in 1969. They also staged protests against the Vietnam War, including their Bed-in For Peace at the Queen Elizabeth Hotel in Montreal, Canada.

During their high-profile campaign for peace, they took part in a number of bed-ins, which went a step further than the popular protest method in the ’60s, the sit-in. They also enjoyed performance art and created “bagism” – a term used to describe their anti-stereotyping protest.

The couple first demonstrated bagism at a press conference when they both wore a giant bag over their body – they said it satirised stereotyping and prejudice. The aim was that instead of focusing on a person’s appearance, people would listen to their message. This period in their lives was described in the Beatles’ song, The Ballad of John and Yoko, in 1969.

They also collaborated on several records including the album, Unfinished Music No 1: Two Virgins, in 1968. The same year, they contributed an experimental track called Revolution 9 to The Beatles’ White Album.

Yoko also sang a mixture of lead and backing vocals on Beatles’ tracks such as Birthday on The White Album and on The Continuing Story of Bungalow Bill. As the Plastic Ono Band, they also produced an album, Live Peace in Toronto, in 1969.

The Beatles disbanded in 1970 and speculation was rife about whether Yoko played a part in this, as she and John went on to collaborate on more music projects including the album, Double Fantasy, just before John’s death. It received rapturous acclaim from the critics.

Personal life
After The Beatles’ demise, John and Yoko moved to New York and had a son, Sean Ono Lennon, on 9th October 1975 – John’s 35th birthday. John became a house-husband so Yoko could continue working and his hiatus from the music industry lasted five years.

John commissioned a photographer to take pictures of Sean every day for the first 12 months of his life. The resulting images, plus other drawings of Sean, were published posthumously after John’s death in a book called Real Love: The Drawings for Sean.

Death
John Lennon was shot dead outside the apartment building he shared with Yoko on 8th December 1980. The killer, Mark Chapman, now aged 62, has been imprisoned ever since. Although he became eligible for parole in 2000, 20 years after the fatal attack, he has been denied parole nine times to date.

Yoko Ono founded the Strawberry Fields Memorial in Central Park in memory of her late husband. She also founded the John Lennon Museum in Saitama (her hometown in Japan) and the Imagine Peace Tower in Reykjavik, Iceland.

Although your meeting may not be as momentous as the meeting of two leading lights in the world of music and arts, &Meetings can still get you off to a great start by organising meeting rooms in London for your event.