Let’s meet some of the leading ladies who have graced our screens over the years, both as allies and as Bond’s nemesis… 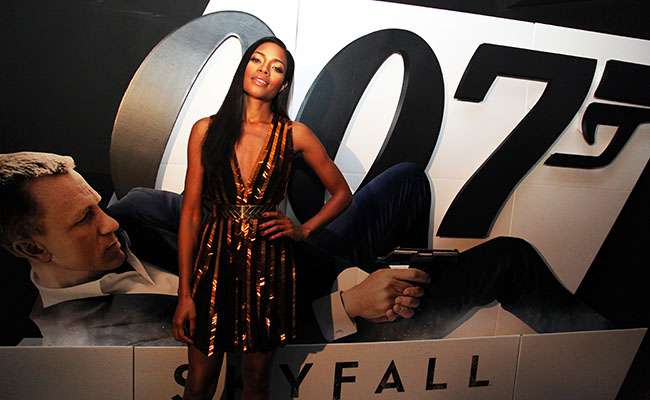 1. Honey Ryder
Played by Ursula Andress, Honey Ryder created perhaps the most iconic Bond scene of all time when the statuesque beauty emerged from the sea wearing a white bikini, complete with a large hunting knife strapped to her hip, in the 1962 film, Dr No. She is a self-sufficient shell diver and beachcomber whom Bond meets when he travels to the island of Crab Key (owned by Dr Julius No) to study suspicious radioactive samples. She helps Bond (played by Sean Connery) after Dr No destroys her boat. Of course, romance ensues.

2. Pussy Galore
Played by Honor Blackman, Pussy Galore appears in the 1964 movie, Goldfinger – again starring Connery as 007. As the leader of an organised crime gang, including female cat burglars, she is the villain. Evil Auric Goldfinger hires her band of female pilots to fly over Fort Knox (home of the US bullion depository) to poison the soldiers with a nerve agent. This would enable Goldfinger to steal one billion dollars in gold bullion. Bond foils the plot and saves Pussy from a plane crash… I think we all know what happens next!

3. Miss Moneypenny
The most enduring of the Bond girls, Miss Moneypenny appears in every film. She is secretary to Bond’s superior officer, M, who leads the British Secret Service, MI6. Lois Maxwell portrayed M in the Bond films from Dr No in 1962 to A View to a Kill in 1985 – Roger Moore’s final outing as the spy. Other actresses who have portrayed Miss Moneypenny include Caroline Bliss, Samantha Bond and Naomie Harris, who has played the role since 2012. More recent films have also portrayed her as an MI6 field officer and a member of the Women’s Royal Naval Service, where she holds the rank of second officer.

4. Domino Derval
French actress Claudine Auger portrayed Domino Derval in the 1965 Bond film, Thunderball. The character was reprised in the 1983 film, Never Say Never Again, when she was portrayed by Kim Basinger. She is the girlfriend of evil SPECTRE agent Emilio Largo. Trying to get to his enemy, Bond discovers Largo has killed Domino’s brother. Bond and Domino have a dramatic meeting when her flipper becomes trapped in coral and he saves her from drowning. He hopes to persuade her to become his ally, after telling her Largo killed her brother. She and Bond become lovers and Bond even contemplates settling down with her!

5. Giacinta ‘Jinx’ Johnson
Halle Berry played Giacinta ‘Jinx’ Johnson, a National Security Agent operative and an ally of James Bond in the 2002 film, Die Another Day, when 007 is played by Pierce Brosnan. Her mission is to kill rogue North Korean agent Zao. As she and Bond begin investigating his links with international diamond magnate Gustav Graves, the pair become lovers, chasing Zao to Graves’ Icelandic diamond mine. However, Jinx is captured by Zao and interrogated. She is rescued from a grizzly death by the intrepid 007.

6. Teresa ‘Tracy’ Draco
Played by Diana Rigg opposite George Lazenby’s Bond in the 1969 film, On Her Majesty’s Secret Service, Draco is the only Bond girl who marries 007. She is the daughter of Marc-Ange Draco, head of the powerful Corsican crime syndicate, Union Corse. A widow, she meets 007 after her only child dies of spinal meningitis and she tries to kill herself by walking into the sea. Bond saves her life and she helps him to track criminal mastermind Ernst Stavro Blofeld to Switerland. For the first time, Bond falls in love and marries Draco – only for his new wife to be fatally shot on their wedding day by evil Blofield.

7. Camille Montes
Camille is played by Olga Kurylenko in the 2008 film, Quantum of Solace, starring Daniel Craig as 007. Bond is on the trail of Dominic Greene, whose public face as an environmentalist disguises the fact he is secretly involved in an international plot to overthrow the Bolivian government. Camille is Greene’s lover, but when Bond learns that Greene is helping the exiled Bolivian General Medrano who murdered Camille’s family, she assists him in his mission. Camille is one of the few Bond girls who doesn’t have a love scene with 007. As a modern, all-action Bond girl, Kurylenko spent several weeks learning how to fight with weapons to play the demanding role.

Each James Bond star had a variety of female companions, so describing them all would fill a book – there were 75 Bond girls in total! This is just a small selection of some of the amazing Bond girls whom 007 has met and worked with in 57 years of 007 movies!

Few meetings are as thrilling as a Bond film, but &Meetings will provide you with the best meeting rooms in London… it’s up to you how you use them!