The famous rhinestone-encrusted dress that Monroe wore, which clung to her like a second skin, became an artifact in its own right and was displayed in Christie’s in Los Angeles long after her death. 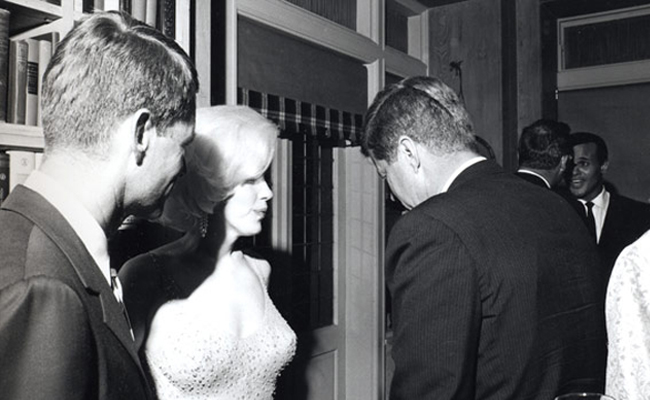 Much mystique has surrounded the actress’s breathy performance of Happy Birthday Mr President at the Democratic party’s fundraiser at Madison Square Garden in New York, not least because of rumours at the time that Monroe and JFK were having an affair. The 35-year-old iconic actress had been called upon to help celebrate the president’s 45th birthday, which wasn’t until 29th May, but her performance was arranged to spice up the fundraiser.

Speculation was rife that the president himself had arranged her appearance, rather than his PR team. However, despite rumours continuing to this day of an affair, some historians have discounted them. Although allegations of the president’s extramarital affairs had surfaced from time to time, historian and author Donald Spoto, who wrote Monroe’s biography in 1993, believed there was no truth in the alleged Kennedy and Monroe romance.

There were very few times throughout their life that JFK and Monroe could have met each other – and there was only ever one known photograph taken of them together after Monroe sang at Madison Square Garden. The black and white photo shows Monroe speaking to the president, with his brother, Robert Kennedy, looking on. Also pictured in the background are White House advisor Arthur Schlesinger Jr and singer Harry Belafonte.

According to historians, they could only have met on a handful of other occasions, one of which was in April 1957, when they both reportedly attended the Waldorf-Astoria Hotel’s April in Paris Ball in New York. However, they were both with their spouses: at the time, Monroe was married to playwright Arthur Miller, while Kennedy, who was senator of Massachusetts, was with Jacqueline. There were also more than 1,000 people in attendance, so it was doubtful that their paths had crossed at this event.

In 1961, JFK – then the newly-elected President of America – and Monroe were rumoured to have been at a dinner party hosted by actor Peter Lawford at his Santa Monica home. However, although it was confirmed the president attended a lunch gathering at Lawford’s, it was never confirmed that the actress was at the event too.

When Marilyn Monroe met the president, no-one could have imagined that it would be the screen goddess’s final public engagement. Her 36th birthday on June 1 proved to be her last – two months later, on August 5 1962, she was found dead in her bed in Brentwood, sending shockwaves rippling through the Hollywood community and across her legion of fans across the world.

Since her death, which doctors said was due to a barbiturate overdose, there have been many conspiracy theories over the years, but as time passes, we are less likely to ever know the truth of what happened on that fateful night. The dress that Monroe wore when she met the president, (the creation of French fashion designer Jean Louis and a favourite of the Hollywood studios), sold for a staggering $1.3 million at Christie’s in 1999.

Not all meetings will be as momentous as when Marilyn Monroe met the president but &Meetings can certainly promise you an award-winning service. To find the best meeting rooms in London, please call 0800 073 0499 and we’ll be happy to help you through the booking process.