Time magazine claimed the two characters’ comic dialogue seemed more suited to an episode of Batman and Robin, while well-known film critic Roger Ebert said the film started “promisingly”, but gradually declined, leading to a “violent, bloody ending” that was out of character with the rest of the movie.

Although it was popular at the box office, the film, written by William Goldman, certainly didn’t show Butch and Sundance as vicious criminals – proven when the characters were voted the 20th greatest heroes in the American Film Industry’s list of 100 Years of 100 Heroes and Villains! 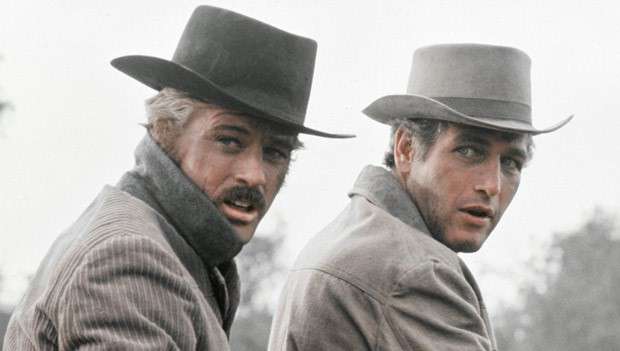 Plot
In the film, Cassidy (Paul Newman) is the affable leader of the Hole in the Wall Gang, who befriends the laconic Sundance (Robert Redford). They go about many of their crimes with a jocular attitude and are portrayed as likeable rogues.

They carry out two train robberies, the first of which is a success, but the second goes wrong when they use too much dynamite, blowing up the baggage carriage, rather than just the safe. They are pursued by a posse of lawmen, but manage to evade capture to carry on their life of crime.

Escaping to Bolivia with Sundance’s girlfriend, Etta (Katharine Ross), they carry on their criminal activities, this time as bank robbers. They try going straight, but in their first job as payroll guards for a mining company, in an ironic twist of fate, they are ambushed by local outlaws!

They kill the outlaws, but decide going straight isn’t for them and they embark on their crime spree again, this time stealing a payroll themselves. Etta returns to the United States, realising they’ll be killed if they continue their robberies.

Sure enough, Butch and Sundance end up in a gunfight with the local police and are wounded. Holed up in a building surrounded by police, they decide they should go to Australia to evade capture. The film ends in a freeze-frame of the duo running out of the building into a hail of police gunfire, leaving the audience to imagine what happened next.

True story
So, what happened in reality when Butch Cassidy met the Sundance Kid? Historians believe that Cassidy genuinely was a likeable man, so in that respect, the film wasn’t wrong. Born Robert Leroy Parker, to a poor Mormon family in Beaver, Utah, on 13th April 1866, he was the oldest of 13 children.

He left home to work as a rancher in his teens to try and escape the poverty of his upbringing. He worked with an older rancher named Mike Cassidy, who had a side-line stealing horses and cattle.
Parker looked up to him and began to follow his lead, changing his name to Butch Cassidy, not only to emulate his friend, but also in case he was caught, so that there would be no comeback on his family. The young Cassidy was said to be charming and well-liked wherever he went.

Meanwhile, the Sundance Kid was born Harry Longabaugh in 1867, as the youngest of five children, in Mont Clare, Pennsylvania. He left home at 15 to travel west with his cousin George, finding work as a ranch hand, but he turned to crime at the age of 20, when he stole a horse and a gun from a ranch in Sundown, Wyoming – hence his nickname. He was captured and jailed for 18 months at Wyoming Territorial Prison. On his release, he returned to working on ranches.

Where did Butch and Sundance meet?
Butch was well-known in the criminal fraternity and on his release from jail, he began to assemble a gang in 1896 with other outlaws, known as the Wild Bunch. The gang members included his friend William Ellsworth Lay, Ben Kilpatrick and Harvey “Kid Curry” Logan.

They robbed the bank at Montpelier, Idaho, making their escape with $7,000 and going on the run, travelling across the country to evade capture. Although there is no record of the exact time and place of their meeting, it is thought Butch met Sundance in Wyoming.

Butch and his gang rode to Hole-in-the-Wall, Wyoming – a pass where outlaws hung out at the time. Sundance was still working as a ranch hand in the area and it is believed he fell in with Butch and his gang at some point in 1896. The Wild Bunch continued on their crime spree, carrying out a number of robberies.

In 1899, they robbed a Union Pacific passenger train in Wilcox, Wyoming, leading to a massive manhunt, with many leading lawmen setting off to look for the train robbers. Typically, the gang would split up after a robbery, meeting up later at Hole-in-the-Wall.

Later life
As depicted in the film, Butch and Sundance carried out other train robberies and bank raids, eventually fleeing to Buenos Aires, Argentina, on 20th February 1901 on the steam ship, Herminius, with Etta Place, Sundance’s girlfriend, to evade capture. They moved to a ranch near Cholila in the Argentinian province of Chubut.

Nobody is sure of Etta Place’s true identity, although she was said to be pretty and well-spoken. It was suggested she was the known cattle rustler, Ann Bassett, who went under an assumed name. However, although there’s no doubt that Sundance had a girlfriend called Etta, there’s no conclusive proof of her true origins or identity.

Apparently, Butch and Sundance had no plans to go straight, as in 1905, they reportedly robbed the Banco de Tarapacá y Argentino in Río Gallegos. They fled with Place to Chile, pursued by armed lawmen. Place apparently decided she’d had enough of life on the run and returned to San Francisco in June 1906.

Cassidy and Sundance started work as payroll guards at the Concordia Tin Mine in the Bolivian Andes, under assumed identities. Cassidy wanted to settle down and become a respectable rancher.

Nobody knows exactly what happened at the end of their life, after working as payroll guards. According to some reports, they robbed a payroll courier near San Vicente on 3rd November 1908.

They were chased by lawmen and legend has it they both lost their lives in a shootout on 7th November at their hideout in a local lodging house.

However, mystery surrounds what really happened that night. It is generally accepted that Sundance died in a hail of bullets at the age of 40 or 41, but a popular theory has been voiced that Cassidy survived the shootout and at the age of 42, he made his way back to the United States, where he lived under the alias of William T Phillips – a machinist, who died in 1937 in Spokane.

The legend began after Phillips published a book called Bandit Invincible: The Story of Butch Cassidy, in 1934. It contained many intimate details of Cassidy’s life that historians claim nobody else could possibly have known except the man himself. This led to speculation that Phillips had actually been writing his own life story.

This has increased the romantic myth surrounding the two outlaws, as it’s unlikely the true story will ever be unearthed.

Not all noteworthy meetings are as eventful as that of Butch Cassidy and the Sundance Kid – and that’s probably not a bad thing! To hire meeting rooms in London, contact &Meetings on 0800 073 0499.