Granted, some of those people who responded to the survey may have been suffering from sleep deprivation or an illness that made them feel drowsy anyway, so it wasn’t necessarily the level of interest at the meeting which caused the problem but if even one person feels so detached at a meeting that sleep seems an option, then something’s wrong – and maybe the style of the meeting needs to be revamped. 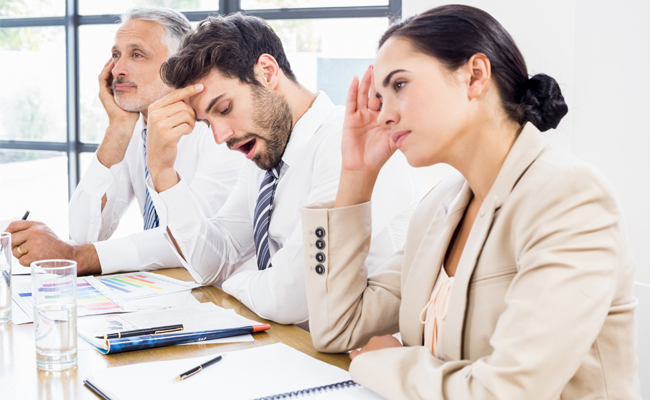 Pre-empting any issues that may affect employees’ enjoyment of the meeting is a proactive approach that should produce dividends.

According to employees, one reason that they dread meetings is because they often start late, wasting people’s time and making everyone feel resentful from the onset. People continue to arrive late, leaving their colleagues sitting around waiting for the presentation to begin.

Politician and inventor Benjamin Franklyn, one of the founding fathers of the United States, coined the phrase, “Time is money,” so when some staff are late, it’s costing your business money in terms of colleagues’ wasted time.

Combat this problem by writing a kind but clear email in advance to let everyone know that being late isn’t an option. Those attending the meeting need to be prepared from the word go, even if this means arriving a little early. Let everyone know your meetings will start on time, even if people are missing. This will satisfy those who turn up on time, while letting the repeat offenders know you’re keeping an eye on them.

Studies have revealed that the average person’s attention span is around 18 minutes, so you may notice people in your meetings getting a glazed expression after a while, even in a 30-minute meeting. The best way to avoid a sea of dazed expressions is to avoid lectures, instead keeping your team engaged by asking for input so they have to keep thinking and don’t just switch off.

If it’s a longer meeting, schedule breaks – and if you’re meeting around lunchtime, make sure beverages and a light lunch are provided. Nothing will take people’s minds off-track more quickly than hunger! The timing of a meeting is also crucial, as holding it too early or too late can kill the mood. Researchers also recommend trying different locations for meetings to pump up creativity.

Studies show the best time for a meeting is mid-afternoon, when employees have completed their work and had time to plan effectively but they won’t be thinking, “It’s nearly home time.”

How many of us have been at a meeting when it overruns and begins to descend into chaos due to one person or team hijacking the agenda with lots of questions or criticism that aren’t always relevant? This can be a disaster unless the chair of the meeting is experienced at dealing with the situation, as other attendees can start losing interest and begin looking at their watches.

It’s crucial to get a grip on the proceedings right away. For example, if the meeting is becoming emotionally charged, don’t let others run away with it – always maintain control. If one team is taking over, use a direct approach to reiterate the agenda. Remind everyone that time is limited and suggest organising a separate meeting to address the specific concerns being raised. Use a professional and matter-of-fact tone to communicate the fact that you’re still in charge.

Appropriate planning to pre-empt any issues will help prevent meetings mishaps further down the line but if something unplanned does crop up, it’s important to keep a cool head and know how to deal with it to get your meeting back on track as quickly as possible.

For the dawning of a new and more fruitful meeting era, &Meetings can get you off to a head start thanks to our great value meeting rooms in London! Phone us on 0800 073 0499 and we’ll be happy to help you through the booking process.